(Clearwisdom.net) On the evening of June 29, 2009, applause and cheers could be heard throughout the course of the third Shen Yun Performing Arts' performance in Auditorio Belgrano, Buenos Aires. Many people from the local art community attended the show. Some of them were interviewed after the show and commended it as spectacular, gorgeous, and worthwhile watching. They said they would tell their friends and relatives to come to see the show. 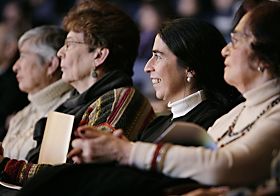 The audience at the third Shen Yun Performing Arts' performance in Buenos Aires on the evening of June 29, 2009

Theater Judge: "I will recommend this performance until I die"

Linda was interviewed after attending the Shen Yun performance on the evening of June 29. She commended the show for being rich and wide-ranging in dances, repertoire and costumes; the essence of the programs was delicate. She found that the dances in Shen Yun emphasize a portrait of emotions.

"I recommend that everyone see this marvelous spectacle," said Linda, "because the colors, the outfits, the way they move, they serve as evidence of great preparation that not everyone can do."

She commended Shen Yun for demonstrating a "combination of luminosity and delicacy" and noted that the feminine dancers in Shen Yun show the subtlety of Chinese women. "The costumes they had and the way the choreography was prepared--because they had very superb choreography--I am more than satisfied," she said. "I will recommend this performance until I die," she said. "Shen Yun is a company worthy of being seen."

Linda said that she attended the Shen Yun performance by sheer chance. When being shown the introductory video, she knew that she wanted to see this beautiful and classical Chinese program.

"The theme of the Chinese movement touches my spirit in a different way, in a way that I feel," said she.

Linda is currently the secretary of a commission for a prestigious national theatre in Buenos Aires, and serves as a judge in other national and academic theatre competitions. Throughout her career, she has gained much experience with cultural programs, drama, comedy, and music.

Vocalist and Singing Instructor: Dances in Shen Yun are a Spectacle

Ms. Neme, a vocalist and a singing instructor at Teatro Colón, one of the world's major opera houses, attended the Shen Yun performance, and said that her favorite part is dance. She was amazed at performers' performance.

"I found the dance acts to be spectacular," she said. "I thought the dancers were excellent. The women were very refined, and [there was] great masculinity in the male dancers. It moved me."

She added that she found all the colors marvelous.

Artistic Photographer: The costumes in Shen Yun are richly colorful

Leandro Natale, an artistic photographer who majored in Eastern Studies, attended the Shen Yun show with his companion Alicia Nieva, a journalist.

Mr. Natale said, "The erhu is something that moves me greatly; the piece presented at the show was just wonderful." "The show was excellent."

Ms. Nieva agreed, "I also liked very much what they told through legends, or story."

"Very beautiful music too," Mr. Natale continued. "Both the soprano and tenors were excellent." He found that the show perfectly displayed multi-faceted features of Chinese culture.

Mr. Natale also commended the costume designs in Shen Yun. He said, "In ballet there's usually the issue of having light and beautiful costumes, but not so rich and decorated. But in this show the materials are good, and they are very well used. I think it's very good in that aspect."

Regarding the program relating to Falun Gong, Mr. Natale said, "I know more or less about the situation of Falun Dafa." "I really think it's excellent, the fact that they tell you through a show about the concentration camps in China, which are a reality not very much reported."

He said that there have often been Falun Gong activities in Argentina, so part of the audience knows about it and what the persecution is.

Mr. Natale said, "Showing the beauty of a faith through art, dance, is the best way." "It's not just showing rules, but showing through culture."

Chinese Photographer: The show is perfect and flawless

Mr. Chen is a professional photographer, and once owned a photography studio. He commended the show for being up to standard! He said, "The costumes, choreography, techniques, and all aspects, are simply impeccable! I felt very special. It can be said to be unparalleled internationally."

Mr. Chen has been living in Argentina for over ten years. He said, "Shen Yun spreads Chinese culture to the whole world, it's the glory of the Chinese nation, and also the pride of the Chinese people."