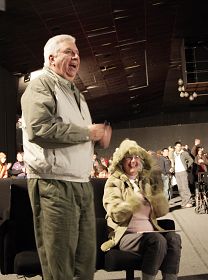 Audience members commend the show after the final performance by Shen Yun Performing Arts at the Teatro Teletón theater in Santiago, Chile

Owner of Chinese Business: The whole show is fascinating

Ms. Bertha Chen attended the Shen Yun performance with her family, who owns a business in Santiago. She is the second generation of Chinese descent in Chile.

She used many words to express her joy at seeing the performance, "Very excellent, very good, and very brilliant." "I am fascinated by the colors, costumes, the color tones of the whole show, the high-level dancing skills, and the cultural connotations. I liked the hosts' introductions that let us know the content of the show."

Ms. Chen most liked the prelude piece, "The Five Millennia Begin." She said, "The piece is fascinating. While I was enjoying the scenery and figures on the backdrop, the real scene and dancers appeared on stage suddenly. It is the piece I liked the most."

She continued, "The pink fans representing spring in the dancing piece 'Welcoming Spring' were very good too. The dance pieces 'Drummers of the Tang Court' and 'Mongolian Chopsticks' were perfect. The dancers and artists are rescuing and reviving Chinese culture."

New Immigrant: The show is new and refreshing

Audience member Ms. Huang, a business woman who has been in Chile for two years, saw the show with her daughter who was familiar with the story of Chang E depicted in the piece "Lady of the Moon."

Chang E and her husband are granted an elixir of immortality as a reward for leading a charitable life. As the two rejoice, her husband accidentally drops the elixir to the ground. Chang E must decide to stay with her husband or go.

"It's all very good," Ms. Huang said. "I haven't seen shows like this in a long time. It's a very wholesome theme."

"My daughter previously danced for many years," she said. "The dancers [in Shen Yun] have very good temperament and manner," she added.

"My daughter likes it all," she smiled.

Mr. Zhou and his wife own a Chinese medicine clinic in Santiago. They are fans of the famous tenor, Guan Guimin, who has been one of China's most celebrated tenors since 1979. He has recorded sound tracks for over fifty movies and TV shows. Ms. Zhou said they saw an advertisement for the show in the subway. After hearing about Mr. Guan's coming, Mr. Zhou went to the theater one day before the show. Seeing so many western people are interested in the show on Chinese traditional culture, he bought tickets for himself and his wife.

"I have seen artistic Chinese groups in China promoting Chinese culture," said Ms. Zhou, who works as an acupuncturist, "but this show is very rare. The way the Yue Fei piece made my heart feel--the Yue Fei one was really good."

Yue Fei's story is from the 12th century when China was invaded by a tribe from the North. Yue Fei faced a dilemma--to be loyal to his country and go and fight or to take care of his elderly mother.

His mother took a needle from her hair and shared in bearing the pain as she tattooed four Chinese characters meaning "loyalty to the country" on her son's back.

"Loyalty," "filial piety," "moral integrity," and "righteousness" paved the foundation of traditional culture in Chinese history. It was reported that when the "Biography of Yue Fei" story was broadcast on a radio station, the crime rate was reduced to almost zero during that time.

Ms. Zhou's husband is also an acupuncturist. He said he liked all of the performances. "Everything--the dancing was also very good. The young ladies and men were very good."

The combined Western method with Eastern flavor and technique is a link between the two cultures that shows through the Shen Yun performances.

Ms. Yuan came to see the third show of the Shen Yun Performing Arts when it performed in the Teeatro Teletón theater in Santiago, on July 12. She was accompanied by her friend, Erwin.

Ms. Yuan, who was born in China, said she has been studying Spanish in Chile and has been here about eight months.

While eating in a restaurant someone handed her a flyer. It was the first time she had heard about Shen Yun.

Ms. Yuan said she had been taught traditional stories by her parents and had also learned stories while at school.

She felt that Shen Yun was wonderful and she admitted that she particularly enjoyed the performance of "The Loyalty of Yue Fei." She was reminded of her "homeland" and felt very nostalgic, but also very proud.

Erwin, who speaks English, was also very impressed and he said when he watched "Welcoming Spring" he was reminded of Ms. Yuan's hometown. He recalled seeing cherry blossoms while he was there.

Erwin, who owns a seafood business, travels to China often. He is keen to learn about China and its history, which he says is "very rich." He particularly enjoyed listening to the music and loved the erhu, a two-stringed traditional Chinese instrument known for its melancholy and hauntingly beautiful sound.

“Hong Kong: Rally Calls for Disintegration of CCP to Stop the Persecution (Photos)”