Shen Yun Performing Arts, Chile: "They Have to See It--It Is a Must!" (Photos)

(Clearwisdom.net) Shen Yun Performing Arts held the third and final show at the Teletón Theater in Santiago on Sunday. 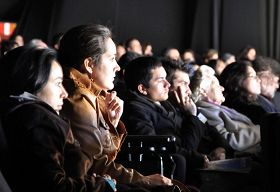 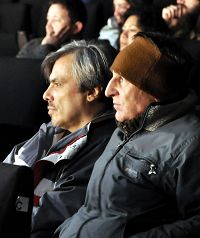 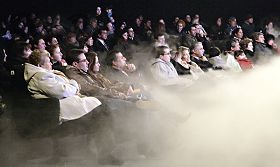 Business owner Mrs. Acuña, helped transform the Teletón Theater in Santiago for the Shen Yun Performing Arts . She, a producer, and her sister, an interior designer, work together to create the sets and spaces. The pair worked for a TV channel before becoming independent this year.

Mrs. Acuña said Shen Yun was fabulous. "We found it really wonderful, something that we have never seen in Chile. Hopefully it will came again. It leaves a very positive message, that I believe is also very useful."

The costumes and make-up captured Ms. Arcuña's attention. "The way they help send the message," she said.

Shen Yun must not be missed, said Mrs. Acuña. "They have to see it--it is a must"

Mrs. Mrksa, a pianist and owner of a family piano business attended the show with her son, Mr. Mrska. Her company sponsored the piano of the Shen Yun Show in Santiago.

Mr. Mrksa shared his thoughts about the show.

"It is a way ... to show the truth. Like telling the world to open its eyes--it can't be silenced," he said. "You can see what the populace is feeling, thinking; people in general. That is what is done by the music and culture. We have to talk with more truthfulness. We have to be more candid; it is that simple, just like that. That way things would be solved."

The Mrska's escaped communism in Croatia and resonated with Shen Yun's mission to revive the ancient heritage. As a result of persecution, Mrs. Mrksa could never return to her home country.

Coming from a family of musicians and theatre workers, Mrs. Mrska has a strong musical background.

"Oh, yes, my grandfather used to be a stagehand. He worked on the stage controls in the opera. I used to play the piano, I was quite good when I was a little girl. Not now, but my son, here, plays the piano and my grandson also plays the piano."

Mr. Mrksa was particularly impressed with the erhu, a two-stringed Chinese instrument known for its enchanting melodies.

"Incredible, the music could be from another county. There is nothing so strange about it. That instrument with two strings is just beautiful. Yes, she is a virtuoso. They are all of high caliber; it is a presentation of high caliber--in every sense of the word."

Mr. Mrska added, "One can easily trespass time into that ambiance."

Mr. and Ms. Retief, who works in fine arts, very much enjoyed the show.

"I think the show was absolutely fantastic," she said, "It was much more than we ever expected in a country like Chile. It's actually a welcome show, something like this, absolutely different than the Chilean culture, the South African culture. It's fascinating.

"The colors are so vivid, it just gives pleasure to look at the show. I came here in a bad mood," she confided, "and now I'm smiling, and I'm feeling relaxed, due to the show, to the colors of the costumes and the music. I really, really enjoyed it."

Her husband, Mr. Pieter Retief, is a network administrator. He liked the show, "very much, very much."
"I've seen many different shows in my life so far but this is the first show of this type I've seen," he said.

The performance gave "an Asian point of view, and it's absolutely fantastic. The colors, the costumes and just the overall way that they portrayed the different regions, and different cultures in China itself, it was absolutely phenomenal. It was fantastic and I would recommend it to anybody to come and watch the show.

"It was fantastic, really," he repeated. "Maybe people will ask, 'why should I waste my money to see something that's from Asia?' And I would say, 'you would not waste your money. It will be something different to come and watch this show. Definitely.' It was something fantastic."

"My wife saw it on a poster in the metro. I went into the internet and did a bit of a research and we decided to come and see it. Definitely."

Reflecting on what impressed her as an artist, Mrs Retief said, "Definitely the colors and the textures of the materials, the silk, the way it floats in the air and the movement of the artists gives a lot of ideas. Of course, it inspires me as an artist.

"I think that first of all there is a message of peace, of love," she said. "And of nature. A lot of Spring in the show."

Ms. Javier Musso and Mr. Ari Maldonado, both professional photographers, were highly impressed with the show.

"I'm surprised and happy, I liked it very much. The visuals, how everything intertwines, the music, the dance," Ms. Musso said.

She had never before seen a show like Shen Yun, with "every scene different from the other."

While watching the performance, Ms. Musso said she felt her heart "beating to the rhythm of the music."

"It [my heart] was going outside a little," she said.

Mr. Maldonado said he was likewise pleasantly surprised with how the show was presented.

"Because of the emcees, how they introduce everything, how they tell you a little of the story, what comes next. And finally the show itself [surprised me], the dancing, the costumes, the colors. That was good. It's been very interesting," he said.

He praised the dancers and the colors, and emphasized the uniqueness of Shen Yun, while noting that he has lived in many countries around the world and has never seen a show like this.

"They [the emcees] give it a special touch, I liked it," he said.

Mr. Musso commented on the piece Heaven Awaits Us Despite Persecution which depicts the story of an innocent family whose father is persecuted for practicing of Falun Gong, a traditional spiritual discipline, by the hands of the Chinese Communist Party in China.

"For me, the presentation of what is going on now in China, the suppression, and the fact they are outside and how they present that, that was one of the things that moved me," he said.

Mr. Maldonado said he will recommend the show to others in "any way possible."

“Photographer at the Second Shen Yun Show in Santiago, Chile: "It Was Wonderful, Very Diverse" (Photos)”