(Clearwisdom.net) On May 30, Falun Gong practitioners, volunteers from the Service Center for Quitting the Chinese Communist Party (CCP), and some local citizens from Montreal held a rally in Chinatown to support 55 million Chinese withdrawals from the CCP. 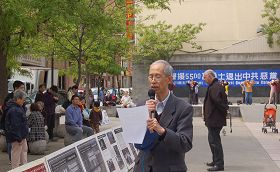 An elderly Chinese gentleman spoke to support the withdrawals. 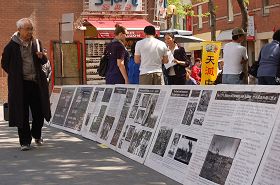 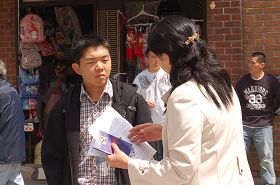 A volunteer handing out materials

Many people have already recognized the evil nature of the CCP. Many people accepted the materials from the volunteers.

Those participating in the rally read aloud selected articles from the Epoch Times and selected announcements by people who have already quit the CCP. They also talked to people in Chinatown, telling them about the movement to quit the Party and trying to convince them to quit. Several Chinese quit the CCP with volunteers' help.

Many people read the display boards that exposed the evilness of the CCP. Ms. Sun, a volunteer from the service center, said that, actually, many people know about how brutal the CCP is, but they don't understand why people need to make the announcement to quit it. "We hope more people know about it and wake up for their own safety," said Ms. Sun.

The rally lasted for four hours. The Service Center is open to the public 7 days a week to help people to quit the CCP.