The Trend to Quit the CCP Awakens People (Photo)

During the past ten years of the persecution, practitioners have organized many peaceful protests worldwide, calling for an immediate end to the persecution. More and more Chinese people no longer believe the Chinese Communist Party's (CCP) slanderous propaganda about Falun Gong. Consequently, the number of people that choose to resign from the CCP increased rapidly. 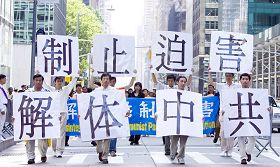 On June 6, six thousand people participated in a parade in Manhattan to show their support for the courageous Chinese people that have quit the CCP.

According to Dr. Gao Dawei, Director of the Global Service Center for Quitting the CCP, 80 million Chinese people have died since the CCP came to power in China. One of the CCP's most recent oppressions began ten years ago. This time, the CCP has exploited all of the state resources, and the methods of torture used by the CCP in its persecution Falun Gong have become increasingly brutal.

Falun Gong did not retaliate in kind, but has peacefully protested over the past ten years. The Nine Commentaries on the Communist Party and the movement urging people to quit the CCP are the practitioners' way of disclosing the evil the CCP has perpetrated on the citizens of China. Practitioners only wish to show the true face of the CCP.

Many CCP officials have read the Nine Commentaries and heard about the significant number of people that have quit the Party. Li Fengzhi, who used to be a high ranking official and former spy with China's Bureau of State Security, is one of those who believed what he heard. After reading the Nine Commentaries and watching the "Quitting the CCP" movement for three years, he decided to take a courageous step and announced publicly his withdrawal from the CCP.

Li came to the United States three years ago and defected. He no longer wanted to be a tool of the CCP to aid and abet the persecution of the Chinese people. The CCP put Li on a wanted list and persecuted his father. Like Li, many Chinese officials that were brainwashed by the CCP from a young age have come to understand the true face of the CCP after they traveled overseas and could read and hear unfiltered information.

More and more officials have quit the CCP. Their minds no longer are beholden to the CCP. If there is ever another June 4 Massacre or another crackdown on spiritual practices like Falun Gong, these officials will not stand by the CCP, and fewer people will be willing to kill for the CCP.

If more and more officials quit the CCP, at a certain point, the CCP will no longer be able to mobilize anyone to persecute and torture practitioners.

Civilians are also awakening. In the beginning of the persecution, many people believed the CCP's propaganda that railed against Falun Gong. They were against Falun Gong. After the Nine Commentaries were published, those people, who are also suppressed by the authorities, realized that it wasn't the local officials that were responsible for the rampant corruption in China. They finally realized that it is the evil nature of the Communist Party that is at the core of all the suppressive movements in China. The moment that people understand that the persecution of Falun Gong is evil and illegal, they will stand up and resist the persecution whenever they come across it.

In the past when authorities wanted to arrest a protester, they would accuse the protester of practicing Falun Gong. This blatant lie no longer works. When supporters of Deng Yujiao, a rape victim who killed a Communist official when defending herself, protested the injustice, police and the authorities claimed that all those involved were Falun Gong practitioners. People now can see the deception perpetrated by the CCP. Instead, this angered more people and many bloggers chastised the authorities online for protecting the wrongdoers.

When the number of people who quit the CCP reaches critical mass, the CCP will dissolve. It will be a magnificent and historical milestone for every Chinese and all practitioners.

“An Understanding about Righteous Thoughts”