(Clearwisdom.net) An award ceremony was held by Blacktown City honoring the winners of the 2009 Blacktown City Festival Street Parade on June 17, 2009. Falun Dafa and its Celestial Band received two awards. 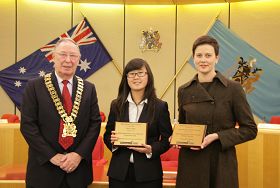 The annual street parade is the largest community festival in west Sydney. Falun Dafa was invited to participate for the ninth time in the parade on May 30 this year. It was the only Asian group in the parade and the procession received warm feedback.

“Malaysia: Such a Great Practice Should Be Widely Spread! (Photos)”