(Clearwisdom.net) "I am 98 years old. I have been practicing Falun Gong for almost 10 years. The more I practice, the younger I get," said Mr. Ma Jiyu. "Ten years ago, I was not like this at all." 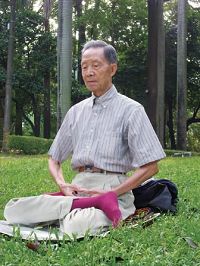 At almost a hundred years old, Mr. Ma Jiyu does the Falun Gong exercises every morning 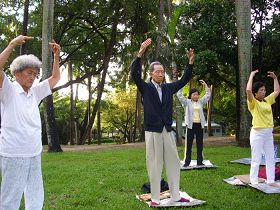 Mr. Ma Jiyu was in Washington, D.C. to promote Dafa

Mr. Ma Jiyu was born in Mei County, Guangdong Province, in 1912. He graduated from the Medical School of National Central University, Nanjing City, Jiangsu Province, and moved to Taiwan in 1948. He became a doctor and retired in 1977. In 1991, his wife passed away.

Mr. Ma suffered from many illnesses, including a heart disorder, an enlarged prostate gland, and incontinence. "At that time, I would go to one hospital one day, then to another one the next day. But I couldn't find a cure for my diseases," explained Mr. Ma. "It was quite a pain. Two thirds of my time was spent in a hospital. Yet my situation was getting worse."

The pain Mr. Ma suffered made him feel like he was "watching the clock while waiting for the final moment." He thought of committing suicide to end all of the pain, but the love and care from his children gave him hope to live. Still, he was overcome with pain each day.

He had reached a point where he didn't think he could endure it any longer when Mr. Ma met Mrs. Lin Fengju, a social worker who took care of single senior citizens. Seeing how sick and elderly Mr. Ma was, Mrs. Lin began caring for him without hesitation.

Mrs. Lin is a Falun Gong practitioner. Mr. Ma saw her doing the Falun Gong exercises every day early in the morning outside before she began to take care of him. He noticed that she found joy in her work and was very peaceful. He then wanted to learn Falun Gong. Mrs. Lin said, "He was extremely weak at that time. Even sitting on the floor was very challenging for him. At first, I let him sit in a chair so he could watch as I did the exercises with other practitioners. Sometimes he would raise his hand to try to imitate the movements."

Mr. Ma felt he could do the Falun Gong exercises as they are "unhurried, slow and smooth." After a few days of trying to do the exercises, he felt very comfortable and continued with the practice.

It was quite a challenge for Mr. Ma to do the sitting meditation. "I was so feeble and had never sat with my legs crossed before. Not to mention crossing both legs in the 'lotus position,' I couldn't even do the single crossed-leg 'half lotus position.'" Gradually, though, he was able to achieve the half lotus after a few months, then the double lotus a few months later. He was also able to meditate longer, from five minutes to 15 minutes, and eventually to an hour.

When asked what gave him the determination and persistence to continue practicing Falun Gong, Mr. Ma answered, "The exercises changed my body dramatically." Before he started cultivation, he had to spend three weeks every month visiting doctors and had to take three kinds of medicines for his heart condition, the enlarged prostate gland, and his insomnia. Three months after starting to practice Falun Gong, Mr. Ma no longer needed the heart medicine or to use a cane. After the fifth month of cultivation, his enlarged prostate gland shrank to normal and he only took a sleeping pill once every week instead of once a day.

After the seventh month, Mr. Ma Jiyu thought, "One should rationally decide his own action from his own mind and not rely on medicine to control sleep." With this thought he said, "That night, I was very clearheaded. I spent the whole night studying the Fa and doing the exercises. I didn't sleep at all. The next day I was awake the whole day and very comfortable. The next several days were the same. I didn't sleep for seven days, but I was comfortable both physically and mentally." After having not slept for seven days and experiencing the rejuvenating power of the exercises and Fa study, Mr. Ma decided to completely stop taking the sleeping pills. "It was a miracle!" Though it happened several years ago, Mr. Ma still sounded excited when telling about it.

Another thing that Mr. Ma thought could not be explained with ordinary human notions was how he was fine after falling. After he began practicing Falun Gong, he fell down several times, but each time he was not hurt. "Can you believe it? For a man in his nineties! Normally, the thing older people fear most is falling down. Once they fall down, they are likely to fracture a bone. But I was always fine."

Mr. Ma gets up every morning at 4:00 a.m. and goes to a nearby park to do the exercises and study the Fa. He can take care of himself now. He said, "This is the most fortunate and wonderful time in my life. All of this was given to me by Falun Dafa."

His children live in the US and are very happy to see the positive changes in Mr. Ma. "Once I went to Washington, D.C. to attend a Falun Dafa Experience Sharing Conference, and they booked a first class seat for me so that I could rest comfortably on the plane."

Having greatly benefited from the practice of Falun Dafa, Mr. Ma has been to many places around the world, including Australia, South Korea, Singapore, the US, and Hong Kong to promote Falun Gong. He said, "Though I am old and walk slowly, I still want to go out to tell people about the cruel crimes that the Chinese Communist Party commits against Falun Gong and tell them that 'Falun Dafa is good!'"

“What Are the Chinese Police Doing?”