Mr. Zhou Xiangyang Near Death--Jail Claims He Must Renounce His Belief to be Released for Medical Treatment (Photo)

(Clearwisdom.net) Mr. Zhou Xiangyang is a Falun Dafa practitioner and former engineer at the No. 3 Design Institute of the Ministry of Railroad in Tianjin City. Mr. Zhou has been on a hunger strike for over 300 days, since June 2008, to resist the persecution. Mr. Zhou was previously a strong and positive man, but due to being persecuted he is emaciated and his life is in danger. The Gangbei Prison claims that to be released on bail for medical treatment, he must sign papers renouncing his practice of Falun Gong. 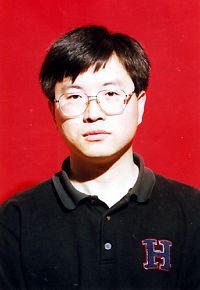 Mr. Zhou Xiangyang, practitioner and former engineer at the No. 3 Design Institute, Ministry of Railroad in Tianjin City

Mr. Zhou Xiangyang, 32, has been jailed at the Gangbei Prison since August 9, 2004. He has been verbally and physically abused and detained in isolation countless times. He has also been on the verge of death numerous times. Because his family members all practice Falun Dafa, the prison has kept an especially close watch on him. The few times when his family was allowed to visit, the prison kept audio and video recordings for analysis. Once they felt that there was "obstruction to the transformation" or "influence on the overall situation," they immediately ended the visit.

In February 2009, the guard captain at Gangbei Prison disclosed that Mr. Zhou was force-fed five times per day and that he could die at any moment. During the previous visits by Mr. Zhou's parents, the captain, surnamed Song, thought that Mr. Zhou and his parents used "code words over the phone," so his parents were denied further visits. Two months later, when other family members went to visit, Mr. Zhou was carried out by four prisoners indicted on criminal charges. He was very weak, small and thin, and his face was deathly white. His voice was stilted when he spoke. Even under these conditions, the other prisoners monitored his speech. If they thought he was starting to disclose the persecution experienced in prison, they kicked his legs or feet to warn him to change the topic.

During the most recent visit by family members, Mr. Zhou suddenly dropped the phone while talking. He picked up the phone again after a long period and told his family members that he had just taken a shower so his hand was a little numb. This is a tactic used by the Gangbei Prison to prevent any persecution marks being left on the body. Every time before visits, the guards arranged to have Mr. Zhou bathed. They also threatened him about what was allowed to be said and what couldn't be said.

The Gangbei Prison recently tried to shift responsibility for the persecution. They notified Mr. Zhou's family that they could apply for his "release on bail for medical treatment," but stipulated that all conditions had to be met. The conditions included his renouncing the practice and transferring Mr. Zhou's permanent registered address from Tianjin City to a village with no ties to his hometown. The prison threatened the family, ordering them not to expose this secret. The prison claimed that this was "special treatment" for Mr. Zhou. When Mr. Zhou's family began organizing this matter, they were suddenly notified that, "Mr. Zhou Xiangyang does not meet the conditions for release on bail. His situation is known across numerous provinces, and it is more complicated. Return home and wait for the announcement."

This result was very surprising and disappointing to Mr. Zhou's family, but it completely followed Gangbei Prison's persecution policy of refusing to release Falun Gong practitioners if they don't write a guarantee statement. This common tactic and persecution method has been used by the Gangbei Prison over the past ten years. The premise for release is a signed "guarantee statement." Not only does the practitioner have to sign, the family members also have to sign, even those who do not practice.