(Clearwisdom.net) On the afternoon of June 7th, 2009, Falun Gong practitioners took part in the Arnavutkoy Festival in the Besiktas District of Istanbul. They also gave a musical performance and handed out paper lotus flowers and flyers to introduce Falun Gong to the attendees. 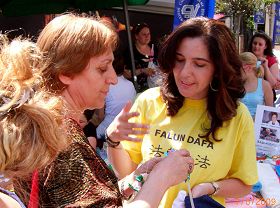 A practitioner hands out lotus flowers and introduces Falun Gong 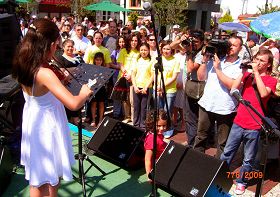 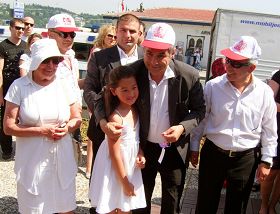 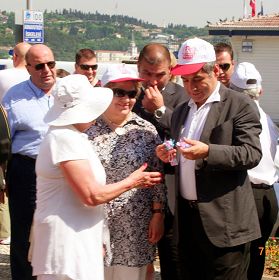 During the celebration that lasted for nearly two hours, practitioners introduced Falun Gong and its wide spread in over one hundred countries across the world.

Many people expressed interest in Falun Gong and asked practitioners for more information. Some people also asked about the address of the practice sites so that they could come learn the exercises.

A young practitioner played Falun Dafa is Good on the violin for the audience twice and received warm applause.

Mr. Ismail Unal, head of the Besiktas district, expressed his congratulations to the young practitioner who performed the music. He also enjoyed the paper lotus flower that a practitioner gave him.

Several television stations in Istanbul covered the event. Kanal 8 TV reported the event on its prime time news on the same evening and showed the Falun Dafa is good performance in its entirety.