On June 7, Mito Middle School hosted the Mito Township Festival. Falun Gong practitioners were invited to give a number of performances during the festival. The Mayor of Mito presented the practitioners with an appreciation plaque to thank them for their valued contribution to the festival. 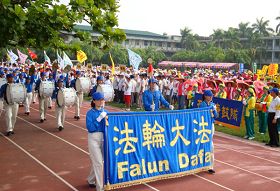 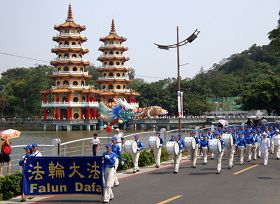 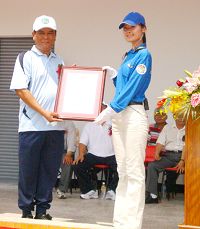 During the morning opening ceremony, the Falun Gong Drum Troupe first performed on the "War Drums." They were followed by practitioners' Divine Land Marching Band and the Celestial Maidens Dance Group, as well as a Falun Gong exercise demonstration by nearly 300 practitioners. During the demonstration, several people in the audience followed along with the exercise movements.

In the afternoon, the practitioners went to two designated sites to perform, and their performances were welcomed by the local people and tourists. They also attracted the attention of many Mainland Chinese tourists.

Over the past several years, local Falun Gong practitioners have been clarifying the truth at popular tourist attractions. In addition, they also offer daily exercise classes at the Mito Township Activity Center.