(Clearwisdom.net) On May 2, a rally was held in Chicago's Chinatown to kick off a 14 city truck tour in the Midwest United States. The tour is to raise awareness of the persecution of Falun Gong and encourage more Chinese people to quit the Chinese Communist Party (CCP). At the rally, Dr. Tommy Xu explained the goal and meaning of this tour. Ms. Yang from Hubei Province and Mr. Zhen from Anhui Province gave their personal accounts of persecution in China. 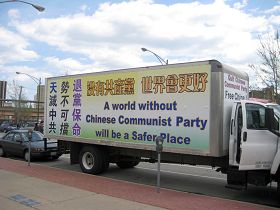 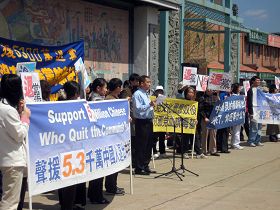 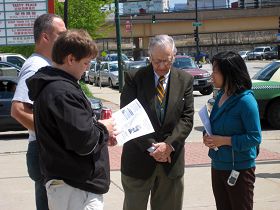 According to Dr. Tommy Xu, the truck tour will start in Chicago on May 2 and visit 12 cities including Milwaukee, Madison, Minneapolis, Des Moines, Kansas City, St Louis, Springfield, Indianapolis, Cincinnati, Columbus, Cleveland and Toledo. The tour will end in Detroit. Along with local volunteers, truck tour members will hold a rally in each city to spread the news of the global quitting the CCP movement and encourage Chinese people to make their choice as soon as possible.

Mr. Zhen recently came to the US from Anhui Province. He was detained more than 5 years in China for practicing Falun Gong and was subjected to many kinds of torture. At the rally, Chen talked about his experience: "In 2001, I was abducted by policemen. I was interrogated 4 days, and continuously subjected to high-intensity light. During the interrogation, I was tortured brutally. They ripped off my clothes, suspended me by my handcuffed hands. My toes could barely touch the ground, and my mouth was taped. A guard then inserted a lit cigarette into my nose. Locking one of my hands with a handcuff to a tall window, a guard named Yang then pulled my other handcuffed hand and started to shake it in all directions. After a while, they lowered me to the floor and tapped on my bruised wrists. They then stretched one of my handcuffed hands to the window and did the same trick. It was extremely painful, as if my whole body was going to split. I have personally experienced the brutality of the CCP and the omnipresence of its suppression of innocent civilians. We cannot ignore the CCP's crimes against China and the Chinese people. It is time to disintegrate this evil party and to end the persecution. Let's quit the party and its affiliated organizations and disintegrate this anti-human evil."

Ms. Yang came from Wuhan. She was arrested three times and tortured in prison because of her belief in Falun Gong. Once, she was forced to stand still for 72 hours continuously. "The guards took turns cursing at me and trying to intimidate me. They punched me, pulled my hair, slammed my head against the wall, and kicked my legs. One guard used a pair of handcuffs to hit my wrists. On the third day, my lower legs swelled and they were as thick as my thighs. My feet swelled so much that my ankles were not visible anymore. My wrists swelled by over one inch and my arms had severe tearing pain. The cell was nearly 40 degrees Co (104Fo) without air conditioning. I was at the brink of mental collapse after the 3-days of continuous torture. It was so painful both physically and mentally that death seemed to be a better option. At last, I fainted. From this experience, I clearly saw how the CCP forced people to commit crimes against others and how it destroyed people's conscience using the temptation of personal interest and gain. If you comply with it, you will get promoted and will be safe for the time being. If you remain steadfast in conscience and refuse to comply, you will be labeled as its enemy to be eliminated. The CCP is systematically destroying people's morality. We must see clear its evil nature and disintegrate it. Only so, can we have a good future.

Ms. Wen from the Midwest Quitting the CCP Service Center also spoke at the rally. She introduced the Quitting the CCP Certification which is now recognized by the US government. According to US laws, any people who were affiliated with the Nazis or Communist Party are not allowed to enter the US. For Chinese people, almost everyone was once a member of the party or its affiliated organizations. However, the US government now honors the Quitting the CCP certification and is using it as an important reference in immigration cases: Chinese people in possession of a valid copy of the certification is exempted from this requirement.

After the rally, participants marched in Chinatown. Many passersby applauded the parade or waved toward the parade. Along the parade route, a lot of Chinese stopped to watch. They were all very friendly and willing to accept fliers about Quitting the CCP.

After the rally, the truck tour hit the road, heading toward Milwaukee.

“Additional Information Regarding the Death of Mr. Wang Naishen”