The Rebirth of an Older Woman with No Stomach (Photos)

Mrs. Wei is seventy-three years old. Her benevolent mind and healthy body are the envy of people her age. Nobody can imagine that just thirteen years ago, Mrs. Wei suffered from three kinds of cancer and had four major operations within five years. In her last operation, her whole stomach was cut away. She was not able to ingest food. Doctors told her that she could live for at most six months. But thirteen years have passed by, and not only is Mrs. Wei still alive, she has become healthier and healthier. 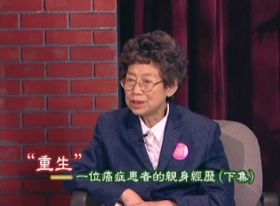 Mrs. Wei, a Researcher Brought Down by Sickness

Mrs. Wei worked at a research institute, specializing in dam design. In 1986, she immigrated to Canada and took a job doing engineering drawings using computer software. After working hard for many years, she often felt tired, dizzy and she bled during defecation. A medical examination showed that she suffered from colon cancer. She had an operation in 1992 and thirty centimeters of her colon was removed.

In 1994, it was found that the cancer cells had moved to other parts of the colon. In order to prevent them from spreading further, she had her colon completely removed this time. In 1995, because of uterine cancer, she had a third operation.

In 1996, she frequently felt stomach aches, so she went to the hospital again. She was diagnosed with stomach cancer, and the doctor said that her only option was to have the whole stomach removed.

Ms. Wei said, "At the time, I never considered whether there was a better option than to have an operation. I had no time to think about how I would eat without a stomach and I decided to have the operation."

Aftereffects from the Operation Put Her Through a Living Hell

Mrs. Wei said, "At the beginning, the doctor said that they were going to put me on a drip. I thought that if I had to depend on an IV for the rest of my life, what would be the point of living? I refused to rely on that solely. The doctor then let me consume some fluids, something similar to a nutritional drink."

"After some time, I was able to have a bite of steamed buns and some rice porridge for a meal. But because I could not take in the normal amount of nutrients, I was so weak that I needed somebody to support me when I stood. I always wanted to eat since I kept feeling hungry. But after I ate something, I could hardly stand the pain."

More and more, Mrs. Wei felt that her life was one of torment. The doctor introduced her to a digestive system specialist. The specialist told her that based on his experience, she would live for no more than six months.

As Mrs. Wei was reaching the end of her life, she again picked up Zhuan Falun, a book that she had once put away on a high shelf.

Before Mrs. Wei had her fourth operation, one of her friends introduced Falun Gong to her. Mrs. Wei said, "My friend let me try practicing qigong. I thought that I had already reached a state of hopelessness. Maybe there could be a little bit of hope if I tried practicing qigong. Later, a Falun Gong practitioner came to my home and gave me a copy of Zhuan Falun. At that time, being affected by fixed notions, I kept measuring phenomena and principals talked about in Zhuan Falun with scientific knowledge I had learned from textbooks. So I missed Falun Gong at first when it was within my grasp."

Picking up this book again, Mrs. Wei did not have those thoughts that she had before. She said, "Now that I knew my life was not going to be long, I read the book again carefully. This time, I accepted the true meaning of human life as the book taught. I accepted that a human has more than one life, and the reason why people have sickness.

"When I was reading the book, I never thought that I could recover from my sickness through practicing Falun Gong, nor did I think that I could keep on living. I only thought that if I was not able to cultivate in this life, then I would cultivate in my next life! Thinking about those doctors and nurses who had been looking after me all the time, I could not bear keeping them worrying and busy any longer, so I asked them to withdraw."

While Mrs. Wei was reading the book in more depth, her view of life was changing. She started to think according to what the book taught: doing things according to the principals of Truthfulness-Compassion-Forbearance, being considerate of others, and putting oneself in other's shoes.

Mrs. Wei said, "Before, I couldn't tolerate any offense, no matter how slight. If I thought somebody had treated me unfairly, I would become angry. If somebody spoke ill of me behind my back, I would never forgive him and even looked for a chance for revenge. But now I do not think like that any longer. I want to look out for others in everything I do and consider other people's feelings, like what's taught in the book."

Later, on the arm of her husband, she went to a practice site to practice the Falun Gong exercises. At the beginning, she had to take a break after walking a few steps. At the practice site, upon seeing that Mrs. Wei was so weak and skinny, the practitioners took special care of her. They surrounded her, read the book and practiced the exercises together. When she initially did the exercises, she could only stand for a very short time. But with her strong heart, Mrs. Wei kept on day after day and month after month. Gradually, her body was recovering. 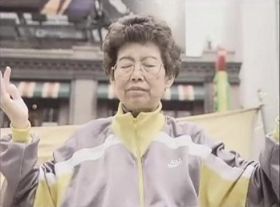 Mrs. Wei can now do the second exercise for up to an hour

She said, "After about one year, I was able to do some household work. For the second Falun Gong exercise, the standing stance, I could do it for only a few minute originally. Now I can keep doing it for an hour."

Her body became stronger and stronger. Miraculously, she began to be able to eat normal food again, and was no longer constrained to small amounts of soft grains.

Mrs. Wei said, "Now I can eat any kind of food. I eat three or four meal every day, including my favorite hard foods. I eat walnuts, peanuts or sunflower seeds every day with no problems."

She said, "In those times, I always felt that I was so happy every day. Not only did Falun Gong give me a healthy body, but I also had a completely new concept about my life, which freed me from worry and pain."

Mrs. Wei Returned the Benefit Received from Falun Gong With Her Heart 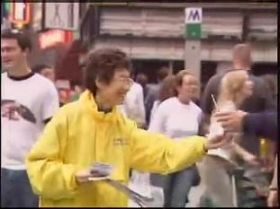 She said, "I was a person with a death sentence, and Falun Gong extended my life. This miracle did not happen only for me. There are many people around me who recovered to various degrees from sickness though practicing Falun Gong. I will use my ability to let people know the beauty of Falun Gong."

After Mrs. Wei began to recover from her sicknesses, she set up a practice site near her home. She carries a tape recorder used to play the exercise music to the practice site every day, regardless of the weather. In the blink of an eye, she has been doing this for over ten years.

Because of the persecution that Falun Gong is undergoing in China, Mrs. Wei is also trying hard to
clarify the truth about Falun Gong. She said, "Every day, besides studying the Fa, doing the exercises, taking care of housework and looking after grandchildren, like other Falun Gong practitioners, I often go out to distribute Falun Gong materials and participate in various activities to expose the Chinese Communist Party's persecution. I want to help everyone know the beauty of Falun Gong, and I also hope that everybody can understand the truth and benefit from Falun Gong."

“Practicing Falun Dafa and Explaining Its Magnificence to People”

“Electronic Games Bring Harm to Those that Play Them”