Western Practitioner: Falun Gong is the Pride of the Chinese People (Photo)

(Clearwisdom.net) Oliver is 22 years old. He is from Australia. On May 10, 2009, he attended the World Falun Dafa Day parade in Hong Kong. He talked about how he became a Falun Dafa practitioner. 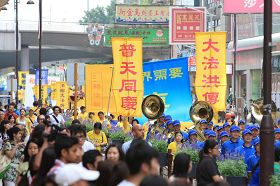 On May 10, 2009, Falun Gong practitioners in Hong Kong held a rally and a parade to celebrate World Falun Dafa Day. The day was the 17th anniversary of Falun Gong's introduction to the public, as well as the founder, Mr. Li Hongzhi's 58th birthday.

In 2003, Oliver was 17 and had just graduated from high school. He came across the book Falun Gong in a library in a small town in Queensland. "When I finished the book, I knew it was what I had been looking for. The teachings in the book made sense to me and were righteous and pure. I started to read Falun Gong books I downloaded from the Internet because they were free. Several months later, at Gold Coast, I found practitioners exercising. I finally became a Falun Gong practitioner," remembered Oliver.

Oliver had been looking for a righteous practice for a long time. When he was in high school, he often read books about religions and cultivation. He read about Buddhism, Christianity, and supernormal abilities. Oliver said, "I think when I chose the path of wanting to practice, my life had changed and that was why I found Falun Gong."

Oliver's health has improved since he began to practice Falun Gong. His acne is gone and he feels light and comfortable.

Oliver said he knew a few things about spiritual practices in many countries because he'd been reading a lot, "Only Falun Gong made me feel righteous. The more I learned about it, the more I felt it was profound. The teachings include elements from traditional Buddha School cultivation in China."

When Oliver was in Hong Kong, he went to a tourist spot almost every day to disclose the barbaric persecution of Falun Gong. Sometimes he heard false comments such as, he and other practitioners were each paid three hundred yuan to be there. Oliver would tell those people that he had a job like everybody else. "I am here because Falun Gong teaches us to be kind and to help others. Many good people are persecuted in China, and that is wrong and we need to help them. We use our hearts to tell the Chinese people the truth and that isn't something money can buy. We hope Chinese people have a good future and that is why we are here."

When asked how he could believe in Falun Gong so much when he had never seen the founder, Mr. Li Hongzhi, Oliver did not think it was an issue. "All the books were written by Teacher. I don't need to see Teacher to believe in what he says. Nobody can force me to practice it. I know what Teacher says is true because I have thought about it with my own rational thinking and personal experience."

When asked about the banner, "Heaven Will Eliminate the CCP," Oliver said that he couldn't agree with it more. He believes the traditional Chinese wisdom, "The good will be rewarded and the evil will suffer retribution." Oliver added, "The CCP controls all the media and hence many people believe what the CCP says about Falun Gong. I have to tell them how evil and cruel the CCP is to torture a group of good people."

Oliver believes that the future of Falun Dafa is bright: "Practitioners will persevere unremittingly in telling the Chinese people what really happened in the persecution. History tells us no one can succeed in suppressing righteous beliefs."

After practicing Falun Dafa for six years, Oliver most wants to tell the Chinese, "The world knows Falun Dafa is good. Please do not believe in the CCP's lies. In western countries, the people know Chinese people are good when they see Falun Gong. Hence, Falun Gong is the pride of the Chinese people."