A week-long van tour spreading the news about quitting the Chinese Communist Party (CCP) kicked off in Chicago on May 2 and ended in Detroit, MI on May 9. A 24-foot truck with its "Quit the Chinese Communist Party" sign crossed 14 cities in 9 states, including Illinois, Wisconsin, Minnesota, Iowa, Kansas, Missouri, Indiana, Ohio, and Michigan. The purpose of the tour was to encourage more Chinese to withdraw from the CCP and its affiliated organizations, and also to help mainstream Western media understand the movement. The tour concluded with a rally on the campus of the University of Michigan at Ann Arbor.

Mr. Michael Collins, Council Member of Toledo, Ohio, spoke at a local rally on May 9. He accepted interviews from a local TV station, FOX news and NTDTV. He said that he was not surprised that many Chinese want to quit the CCP. He thought he knew about the CCP but didn't know the persecution was so severe.

On behalf of the city council, he issued a resolution to the van tour for providing "a voice and an opportunity to raise awareness for those who have suffered persecution directly and indirectly from the Chinese Communist Party... to be the voice for those who are still experiencing persecution, but unable to speak out for themselves at this moment."

Congresswoman from Ohio Marcy Kaptur also sent a supporting letter to the rally. 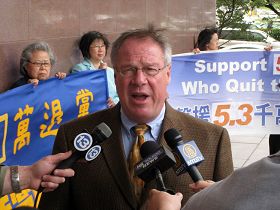 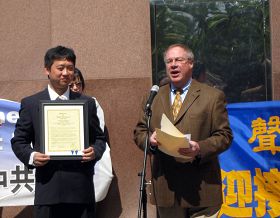 On behalf of the city council, Mr. Collins issued a resolution to the van tour 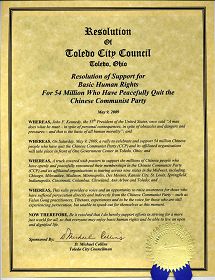 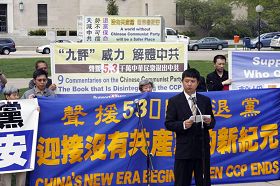 Dr. Xu Zhiwei gives a speech at the rally in Michigan. 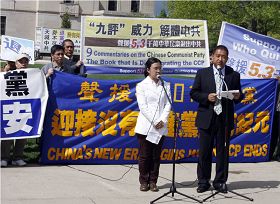 Mr. Zheng, a member of the van tour, gives a speech at the rally. 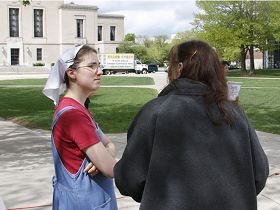 A local resident is moved by the van tour's message 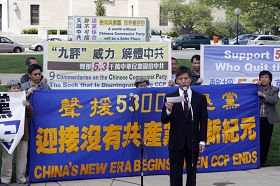 Paul Pham, Chairman of the Vietnamese-Americans in Michigan Association, gives a speech. 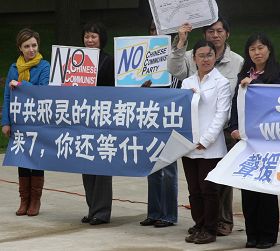 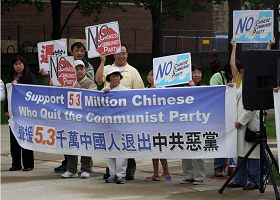 Paul Pham, Chairman of the Vietnamese-American in Michigan Association, gave a speech, in which he pointed out that people will have real freedom without the Communist Party.

Huang Ciping from the Chinese Democracy Association sent a support letter to the rally. He appreciated that the Epoch Times published the book the Nine Commentaries on the Communist Party fives years ago, which initiated the trend of quitting the CCP.

The members of the van tour said that they got a lot of support during the tour. In Springfield, Illinois, a policeman applauded them and said, "I'm on your side." In Milwaukee, Wisconsin, a freelance writer took notes on what the van tour members said and said that he will spread the message. In Ann Arbor, a Catholic nun cried when she learned about the persecution.

On the campus of the University of Minnesota, many Chinese students and their families were shocked by the signs on the truck. In Kansas City, Chinese people waved to the members and took photos of the truck.

Ten members finished the van tour. Mr. Zheng, who had just escaped from China, said at the rally, "I was illegally jailed by the CCP for five years. I told myself that I must live on and expose their wickedness. We have received a lot of support from the American people during the tour. I am especially touched by the support from the policemen."

Ms. Wen, a visiting scholar, said at the rally, "Many people here in the United States have a deep understanding of the CCP's evil nature. They gave us very positive feedback."

Dr. Xu, one of the organizers, said, "Our goal is to let more people know about the CCP. During the tour, everything went smoothly. The local governments and NGOs have given us a lot of support, and we appreciate it. We have a common goal of a China free of the Communist Party."