May 13th marked the 17th anniversary of Falun Dafa's introduction to the public. Falun Dafa practitioners in Queensland, Australia, held an activity on Brisbane Square in the heart of the capital to celebrate the grand occasion and convey their respectful greetings on Mr Li Hongzhi's 58th birthday.

During the activity, practitioners demonstrated the five sets of Falun Gong exercises to the public. On the square were also many photographs and poster board displays that showed how the practice has spread and history of Falun Gong and exposed the brutal tortures inflicted on practitioners under the Chinese Communist regime's barbarous persecution. 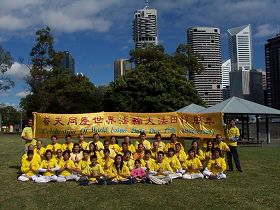 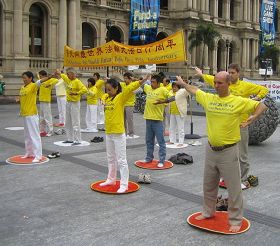 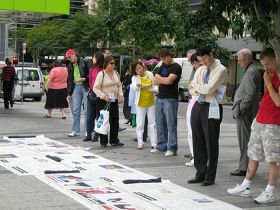 People reading the display boards that explained the truth about the persecution. 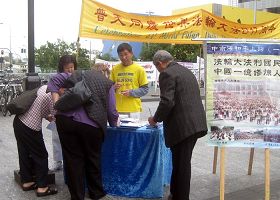 Passersby sign the petition and condemn the persecution of Falun Gong.

Only Falun Dafa could resolve all the queries in my heart

Spokesperson for the Queensland Falun Dafa Association Mr John Andress said that the goal of the activity was to celebrate the 17th anniversary of Falun Dafa's public introduction and share the beauty and magnificence of Dafa with the Australian people. Aside from this, it was important to help people understand the truth about the abuse inflicted upon innocent Falun Gong practitioners under the Chinese Communist regime and bring an end to this unprecedented persecution.

Mr Andress said, "Falun Dafa has been spread for seventeen years, and the persecution has continued for ten years. Some relatives of Australian citizens who are in China are still being tormented by the Chinese Communist regime, so we want to use this opportunity to let people know the facts, in hopes that together we can bring an end to this persecution."

Before practicing Falun Dafa, John had searched and searched for a cultivation way that would truly guide him. However, after many years of searching and looking into different religions, he still could not find the right path. He said, "I have always wanted to cultivate. For many years, I couldn't find what I wanted in other religions and practices. Then I found Falun Dafa, and the queries in my heart were finally resolved--I had found the answer."

Such a peaceful practice should not be persecuted

During the activity, many people gathered around the square. They were shocked by the images of torture on the display boards, and many stopped to sign the petition against the persecution.

A Western lady who resided in the Gold Coast said, "Such a peaceful group of people (Falun Gong practitioners) should not be persecuted." She had once seen anti-torture demonstrations on the streets of Manhattan in New York. At that time, she was outraged and could not understand why such a peaceful practice like Falun Gong would be persecuted by the Chinese Communist regime. Since that time, she has often told the facts about the persecution to others.