With the approach of the tenth World Falun Dafa Day, Falun Gong practitioners in Sweden, together with their family members and friends, gathered at the Kungstrad Garden in the centre of Stockholm on May 9, 2009, to celebrate the 17th anniversary of Falun Dafa's public introduction to the world and respectfully wish Master Li a Happy 58th birthday. 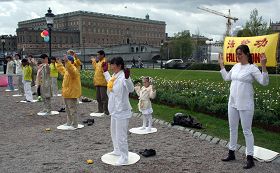 Young practitioners demonstrate the second set of the exercise. 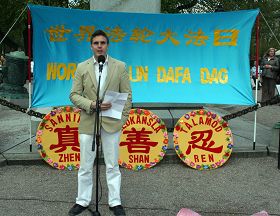 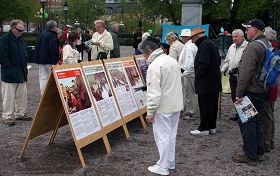 Many people came to learn the truth. 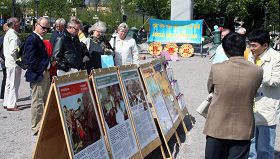 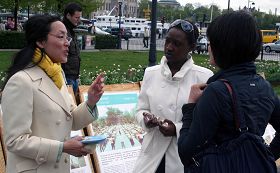 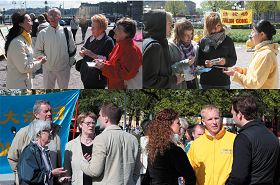 Soon after 11:00 a.m. on May 9, the weather was cool and the air was very fresh just after a light rain. Many tourists at the Kungstrad Garden in the centre of Stockholm were attracted by the beautiful Falun Gong (also known as Falun Dafa) exercise music, the peaceful and tranquil scene of practitioners' exercise demonstration as well as display boards showing the spread of Falun Dafa around the world and the truth about the brutal persecution of Falun Gong in China. Many people stopped to see the activity and come to talk to practitioners. There were also people who were interested in learning the Falun Gong exercises.

On May 13, 1992, Mr Li Hongzhi started introducing Falun Gong to the public in Changchun. Seventeen years later, today Falun Gong is practised by people in 114 nations and regions around the world. The main book of Falun Gong, Zhuan Falun, has been translated into over 30 languages and published around the world. It has been well received by people of all nationalities and races. Many people in different countries started to practise Falun Gong after being introduced to it by other practitioners or through the Internet and media reports. However Falun Gong practitioners in Sweden have a very unique story.

On April 6, 1995, the founder of Falun Dafa, Master Li Hongzhi, came to Sweden and gave five successive public lectures. From April 14 to April 20, Master Li held the second overseas Falun Gong study class at Nordgarden in Goteborg. This would become the last Falun Gong class that Master Li personally taught. The majority of participants were Westerners. They were from different cities and professions, including Professors, medical doctors, nurses, workers and managers. Over a hundred people learned Falun Gong and started to truly practise cultivation.

Today Over 30 cities in Sweden have Falun Gong exercise sites, covering the whole nation. Falun Gong practitioners in Sweden are dominantly westerners. The seeds of Truthfulness-Compassion-Forbearance have become deeply rooted in Sweden.

Many people want to hear the truth now

Western practitioner Cecilia said: I can obviously feel that people have changed a lot. Many people want to hear the truth and more and more people are interested in Falun Gong now. Moreover, not only do people have sympathy for Falun Gong, they also take initiatives to help practitioners and make efforts to end the persecution of Falun Gong that has lasted ten years. The two ladies I just talked to, one was a news reporter. After learning the truth, she took all our information about Falun Gong and said she would write an article and send it to news agencies in Sweden. She felt that more people should know about this matter and everyone should be concerned and help to end this persecution. Her friend also said that she would write to the Swedish prime minister.

Western practitioner Mats also said that now Swedish people have changed greatly in their attitude towards Falun Gong. Some people would not be concerned with this matter before. Now, more and more people want to know about Falun Gong. People are very indignant about the Chinese Communist regime's atrocities. Despite the relentless and brutal persecution that has lasted ten years, yet more and more people practise Falun Gong. This phenomenon has made Swedish people ponder. Now many people would not just walk away after receiving a Falun Gong leaflet, they want to talk to practitioners to learn more information about Falun Gong.

Finally they all talked about one point: they are very moved to see changes in people and are encouraged to let more people know of the persecution suffered by innocent Falun Gong practitioners and expose the lies spread by the Chinese Communist regime until the day the persecution ends.

There were many Chinese tourists at the event. Some of them just came to Sweden from Mainland China for sightseeing.  Initially they were quite shocked to see a Falun Gong activity. After talking to practitioners, many of them accepted leaflets. When mentioning the current situation in China, they became quite emotional. One young man said: "I have a friend who spent almost all his life saving to build a house. Soon after the building was finished, the government decided to pull it down. They were compensated very little. Such things are too common in China. Ordinary people suffering injustice have simply nowhere to seek justice. I have encountered many such things." When he heard about the great tide of withdrawals from the Chinese Communist Party, he was very pleased and said he would let more Chinese people know about it.

Not far away from the display boards stood a thin young person with a camera. He walked around and stopped from time to time to take photos of practitioners from different angles. When practitioner went to talk to him, he walked away covering his face. A Swedish person who was reading the display boards said: "That person is from the Chinese Embassy. I saw him when I was doing business there."

Practitioners are aware that every year the Chinese Embassy sends official to spy on practitioners. All Falun Dafa activities are open. Practitioners hope that the officials from the Chinese Embassy will treasure every opportunity to learn the truth, because they have unique advantages compared to other people in China. They should distinguish clearly between right and wrong, see through the evil nature of the Chinese Communist Party, make a clean break with it and stop deceiving themselves and others so that they can enjoy a beautiful future.