"This Is Great News!" (Photos)

Initiated by the Midwest Service Center for Quitting the Chinese Communist Party (CCP), a 14-city truck tour kicked off in Chicago on May 2, 2009. Having stopped in Milwaukee, Madison, Minneapolis, Des Moines, Kansas City, St. Louis and Springfield, the tour arrived in Indianapolis on May 6.The rest of the tour will include Cincinnati, Columbus, Cleveland, and Toledo, and conclude in Detroit. Over the past few days, the 24-foot-long truck printed with "The CCP Is Doomed; Quit CCP To Be Safe," stopped in a number of Midwestern cities. Volunteers for the Service Center for Quitting the CCP held rallies at the stops. Local residents came out to show support. 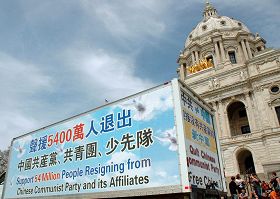 Truck tour stops in front of the State Capitol in Minneapolis. 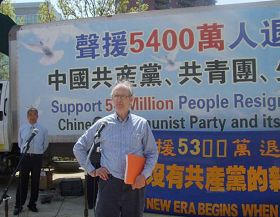 Professor Loren of Western Iowa Tech Community College gives a speech at the rally in Des Moines supporting resignations from the CCP. 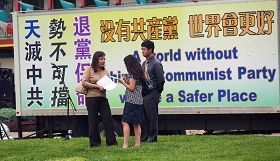 Reporter for the Kansas City Star interviews volunteers from the Service Center for Quitting the CCP. 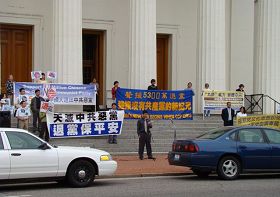 Rally in front of the historic Old Courthouse in St. Louis 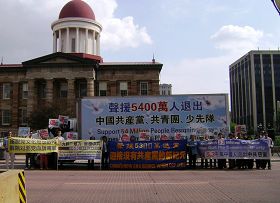 Truck tour in front of the Old State Capitol in Springfield.

Professor Loren of Western Iowa Tech Community College gave a speech at the rally in Des Moines supporting the wave of resignations from the CCP. He said, "Several years ago I thought China, while still Communist, was moderating its policies and establishing human rights similar to Poland and other former Communist countries. I have since found out about the persecution of Falun Dafa and other groups, the labor camps, censorship of all media and other abuses. As the people of China have seen through the censorship with the help of publications like the Nine Commentaries on the Communist Party, millions of people have resigned from the Communist Party and its affiliated organizations in protest."

Professor Loren quoted Dr. Yanjun Sun, a visiting professor of Psychology of Religion at the University of Hawaii who just recently left China. Sun, who has publicly severed all his ties to the Chinese Communist Party, stated, "The sciences, including psychology, are destined to serve the advancement of humankind. However, under a dictatorship, science becomes the accomplice of tyrannical rule. This is the deepest shame of scientific professionals. A scientist can apply professional knowledge to do good things as well as to do evil things, and because of this, a scientist has to be responsible for his or her conduct, to make sure that what he or she is doing is beneficial to human society.

"I cannot accept that the Chinese government has mobilized the entire state-run machinery to persecute peaceful religious groups like the Falun Gong in their efforts to control the population. The Chinese communist regime has brutally persecuted those Falun Gong adherents who persist their faith of Truth, Compassion, and Tolerance [the founding principles of the Falun Gong spiritual practice]. Over the past ten years, the Chinese communist regime has employed multiple defamatory and slanderous campaigns against Falun Gong, and they have committed the crime of genocide against adherents of this peaceful practice."

Ms. Sachiko from Japan is a member of the Inter-Religious Federation for World Peace. She showed support at the rally in Des Moines, stating, "The Communist Party doesn't believe people have a spirit, so they kill the innocent."

When the truck arrived in Kansas City, a man jogging in a park stopped and gave the volunteers a thumbs-up. He said, "[54 million people resigning from CCP] This is great news! Good luck!" A young man signed his name in support of Falun Gong and said, "I support you! I am not free until everyone in the world is free."

The rally in St. Louis was held downtown. Many people who work in the nearby companies, banks and government entities passed the rally and received fliers. Many of them stopped to listen to the speeches or talked to the volunteers. They showed great support for the activity. Two young mothers passed the rally with their children and showed their support. One of them said that her child had watched a video in school about the CCP's violation of human rights. She knew there was slave labor in labor camps in China, "That's why some products from China are so cheap."

The rally in Springfield was held in front of the Old State Capitol. Drivers who passed by waved and honked to show their support. A policeman was very excited to see the big banner supporting 54 million people resigning from the CCP. A volunteer held out a flyer for him. He said, "I don't need it because I stand on your side!" Two ladies listened to the speech until the end. They asked for more information about the trend of quitting the CCP and signed the petition to show their support. Mr. Peterman talked to the volunteers for a long time. He said the activity was great. Now he knew why many products from China were so cheap; it is because there was persecution and slave labor. He said he hadn't thought of it before.