The Story of a Young Lawyer (Photo)

(Clearwisdom.net) Taipei, TAIWAN- By age thirty, Fenglan had made a partnership with a law firm. Just as her life seemed smooth and her career was on the rise, depression hit her; it almost ruined her. The following story is about how she got back on her feet and started a new life. 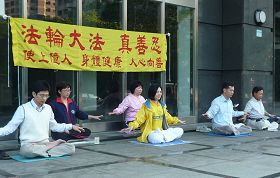 Standing in the middle with a yellow shirt on, Fenglan does the Falun Gong exercises every morning.

From the Apex to the Bottom

Thinking back over the difficult events that took place in 2003, Fenglan now feels grateful to enjoy a second life.

When working in the law firm, Fenglan was in charge of the cases of company mergers. She had a good reputation in the business and hence, she was always busy. It wasn't unusual that she skipped sleeping several days in a row just to finish work in progress. She loved her job and loved to be able to have responsibility over every case she handled.

Due to a busy lifestyle, pressure from work and physical exhaustion, depression hit her in 2003; she was defenseless against it. All of a sudden Fenglan lost interest in everything in her life. She was mentally and physically run down. Fenglan developed typical thoughts related to depression, like that of hopelessness toward her future.

Fenglan's health was affected greatly as well. She suffered breakouts all over her face and her entire body was swollen. This situation upset her greatly because she cared very much about her outward appearance. She felt she had reached the bottom of the barrel. "I felt frustrated, both with and without work. I did not know what I wanted and felt awful." said Fenglan. She wanted to quit her job as a lawyer.

Fenglan grew up in a Buddhist family, and although she tried chanting the sutras and incantations, it did not help with her descending health and mood. She had a big question mark hanging over her life and work. She often wondered why she suffered so much and what was the meaning of her work. She tried to read many spiritual books from east and west but did not find the answers she was seeking.

One day a very good friend of hers came to her excitedly and said, "I recently learned Falun Gong, do you want to try it?" For Fenglan, Falun Gong was a just a qigong group suppressed by the Chinese Communist Party. But, since nothing else she was doing was working, Fenglan decided to give Falun Dafa a try. She bought the book Zhuan Falun and attended the 9-day Fa study and exercise class.

After she finished the classes, she earnestly studied the Fa and did the exercises at home. Two months later, as she was on her way to work, Fenglan glanced outside of the car window and saw golden sun beams shining through tree leaves on the ground. Seeing this, she suddenly felt that the world was so beautiful. At that moment, the depression that had tormented her for over a year had suddenly lifted. She was in high spirits and full of energy.

Fenglan started practicing because of her illness and it totally changed the way she looked at things. She admitted that before she practiced Falun Dafa, she seemed rich and had a lot things others yearned for, but she was secretly hollow and lonesome. "I wanted something that I didn't have and I feared losing it after I had it. When I prayed to Buddha, I kept on asking him to bless me with a happy life and bless me with everything I do," said Fenglan.

Thinking back, Fenglan felt she lived in fear and uncertainty. She was afraid of suffering hardship and tribulations, afraid of being unhappy, afraid of bad things happening to her; she realized there was very little thing man could have control over and hence she held on tightly to the money she had. In essence, her life's goal was to make more money and to pursue fame and personal gain.

After she learned Falun Dafa, Fenglan discovered an utterly different world that was so wide and broad. When she understood the purpose of life was to return to one's true self, she suddenly awakened from her doubts. She felt relaxed and at ease. According to her, the Falun Dafa teachings asked her to be selfless, to give up attachments, to forbear, and to be considerate of others. It was hard but she did not mind, for she knew she had found a true treasure that she would not give up for anything in the world.

Fenglan's husband was happy to see the big change in her. Before she learned Falun Dafa, Fenglan's husband often complained to her, "You only think about yourself and look at everything from your point of view." Fenglan paid no attention to this criticism because she did not think there was anything wrong with looking out for number one. After she became a practitioner, she gradually learned to think from other's standpoints and to be considerate of others in all respects. Fenglan's change made her husband a loyal Falun Gong supporter. Her employees also considered her a great boss that is easy to communicate with.

Since 2005, Fenglan started to understand how bad the torture of Falun Dafa disciples was in China. She helped to hold a forum to let lawyers and human rights activists in Taiwan understand the ongoing persecution in China. From then on, Fenglan uses every opportunity to tell people around her the facts of the persecution.

In March 2006, the inside story of the Chinese Communist Party removing and selling Falun Gong practitioners' organs while they are still alive was exposed. Fenglan remembers how shocked she was. She could not bring herself to read anything about it for three days as it was too distressing.

Being a just lawyer and a practitioner who benefited from the practice, Fenglan decided to help the Coalition to Investigate the Persecution of Falun Gong (CIPFG) and to expose the evil crime of live organ harvesting to the society in Taiwan. She wanted more countries and organizations to know the inhuman tortures Falun Gong practitioners in China suffered and hoped people of justice can work together to end this brutal persecution.

The Chance to Learn Falun Dafa Is Precious

Fenglan often talks about how she missed learning Falun Dafa by an inch when she visited Hong Kong in 1999. She saw Falun Gong practitioners put booklets with information of the persecution on a small cart. She did not get close enough to learn more because she felt a bit apprehensive and thought it was none of her business. Now she regrets that day because if she had been more courageous and learned more about Falun Dafa, she would have known about this wonderful teaching many years earlier.

Fenglan has been practicing Falun Dafa for four years now. She believes it is mankind's true 'Law' and 'Way'. Unfortunately because of the Chinese Communist Party's slandering and suppression, many people are unable to learn of the beauty of Falun Dafa. She believes one day, with all the efforts from just people around the world, the truth of Falun Dafa will appear in front of everyone.