(Clearwisdom.net) On Monday, April 6, 2009, Falun Gong practitioners in Canada held a press conference asking Stockwell Day, minister of international trade, to focus on the issue of the persecution of Falun Gong when he visits China on April 7. 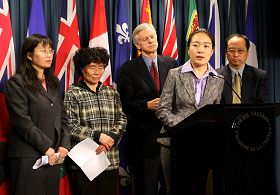 Li Xun, president of the Falun Dafa Association, said at the press conference, "Canadians cherish having human rights and moral values be incorporated into business and society. The Chinese Communist Party (CCP) continues to threaten Canada with trade issues and pressures Canadian officials to ignore the fact that the CCP tramples on human rights. The CCP's attempt to undermine Canada's principles is unacceptable."

Families of Canadian Residents Tortured and Enslaved to Manufacture Exports

Ms. Chen Guizhi, 62, who arrived in Canada on February 18, 2009, talked about her experience of being tortured in China. Ms. Chen was twice put in a forced labor camp, in 2002 and 2006, because she distributed informational flyers about Falun Gong in public. "The first time I was sent to a forced labor camp, there were about 700 people there and half of them were Falun Gong practitioners. The second time, I was taken to the Huhehaote Women's Forced Labor Camp in Inner Mongolia. There were approximately 300 people in there and half of them were Falun Gong practitioners, said Ms. Chen. During her incarceration, Ms. Chen was forced to work hard for 14 hours per day making crafts and daily commodities, most of them for export.

Ms. Chen continued, "Beginning in April 2007, I was forced to remove tape that was used to immobilize electronic units on IC boards, so they could be recycled. I had to work on almost 2400 IC boards per day, starting at 6:30 a.m., and working until 9:00 p.m. Some days I had to clean over 4,200 of them and work until 11:00 p.m.. My fingers became deformed due to the labor-intensive work, and my spine also became crooked and my hearing deteriorated."

Yao Lian is a resident of Montreal. Her husband, Ma Jian, was arrested in the PCM Company office in Beijing on February 28, 2007, and unlawfully sentenced to two and a half years in a forced labor camp. Ma was forced to do intensive labor.

In July 2006, David Matas, Canadian human rights lawyer, along with David Kilgour, former Canadian secretary of state (Asia Pacific) and member of parliament, published an independent investigative report which concluded that a large number of Falun Gong practitioners were killed illegally and their organs removed and sold for profit. At the press conference, Mr. Kilgour said, "Legal trade can help people in the work force live better lives. We are against unfair trade, base abuse, and exports that are made in forced labor camps. What we hear today is that since 1999, tens of thousands of Falun Gong practitioners and prisoners of conscience have been enslaved in forced labor camps, and this results in manufacturing workers losing their jobs in other countries, including Canada."

The letter from Falun Dafa practitioners to Canada's Minister of International Trade states, "Since August 2006, Professor Manfred Nowak, UN special rapporteur on torture, and Dr. Asma Jahangir, UN special rapporteur on freedom of religion or belief, have many times provided evidence on illegal organ removal from living Falun Gong practitioners. They demanded the Chinese regime to make investigations into this issue and ascertain responsibilities. Beijing has not yet given any satisfactory response."

Persecution in the Name of Beijing Olympics