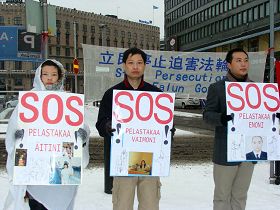 Three Falun Gong practitioners stand in the rain and snow, appealing to rescue their relatives 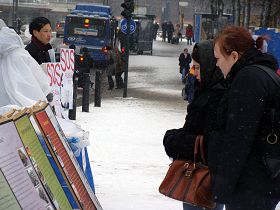 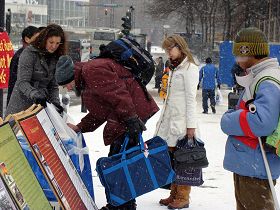 People line up in the snow to sign petition

Early spring is still quite chilly in Finland. Strong wind carrying snow buffeted people constantly, and soon the practitioners' clothes, shoes and hats were wet. To prevent the petition forms from being spoiled, practitioners used a thin plastic film to cover the table and carried on with their activity.

Practitioner Xiao Jin came to Finland to visit her relatives last July. Two days after she arrived in Finland, her mother was illegally arrested in China and sentenced to eight years of imprisonment. Although Xiao Jin escaped a similar fate, she can no longer return to China. Her younger sister in China has not been allowed to attend school and has been relying on help from their family friends to get by.

Practitioner Lao Wu was rescued from Thailand last year. He and his wife previously had good jobs in China, but his wife was sentenced to ten years in prison for practicing Falun Gong. An uncle of practitioner Xiao Shi has been detained by the Chinese Communist regime three times, and subjected to severe beatings and torture. The three practitioners held SOS boards with their relatives' photos, and quietly told their own stories. They appealed to people to help rescue their relatives.

At one point, a group of over ten young people were passing by the square. When they saw practitioners holding the SOS boards, they came over to enquire about the activity. Practitioner Anna explained to them that the relatives of these three practitioners were being imprisoned and persecuted in China, and that they were here to appeal to people to rescue their relatives. These youngsters immediately changed their "don't care" attitude and lined up to sign the petition without any hesitation. They also told practitioners that everyone knows that the human rights situation in China is terrible. When they passed the activity site again later, they greeted practitioners to show their support.

In the heavy snow an older lady was walking slowly with the help of a cane. When she saw practitioners holding the SOS boards in the snow, she asked practitioner Xiao Wang what they were doing. When she learned that these practitioners' relatives were being imprisoned because of their belief in Truthfulness-Compassion-Forbearance, and the wife of one practitioner had been imprisoned for eight years, this lady silently walked to the table to sign the petition.

Mr. Onni Pohjanpalo told practitioners that he passed through the square frequently, but had not read the banners and display boards carefully. Today he stopped and carefully read the information. He was very shocked. The local media has not reported much about Falun Gong, and he said he hoped to conduct a radio interview about Falun Gong and the persecution in China.

After reading the display boards, a lady told practitioner Xiao Jin, "Not only they (the Chinese Communist regime) persecute you, they also persecute Christians." She repeated this a few times.

Although the weather was quite bad, during the four hour activity, more people signed the petition than on previous occasions.

“Turkey: Clarifying the Truth at the Agriculture Production Show (Photos)”