Singapore: Practitioners Clarify the Facts and Expose the Persecution on the Tenth Anniversary of the April 25th Appeal (Photos)

(Clearwisdom.net) At dusk on April 26, 2009, Falun Gong practitioners in Singapore held a series of activities at the Speaker's Corner at Hong Lim Park to commemorate the tenth anniversary of the April 25th peaceful appeal, expose the atrocities of the Chinese Communist Party (CCP) and call for an end to the brutal persecution of Falun Gong. 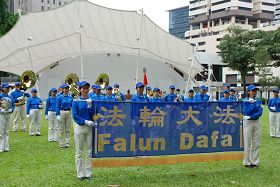 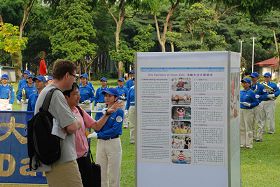 A passerby stops to learn the facts about Falun Gong

The Singapore Divine Land Marching Band, comprised of local Falun Gong practitioners, performed a number of songs. A group of practitioners demonstrated the five sets of the exercises to the serene music. A number of display boards erected on the lane in the park illustrated Falun Dafa's wide spread around the world and the persecution of Falun Gong by the CCP. Practitioners held banners reading "Falun Dafa is Great" and "Commemorate the 10th Anniversary of the April 25th Peaceful Appeal." Passersby were drawn to the event to learn more about Falun Gong.

April 25th was a special day for the Falun Gong practitioners. On April 25, 1999, more than ten thousand practitioners peacefully appealed at the State Council Appeals Office in Beijing for an unrestricted environment in which to practice Falun Gong. The practitioners' peacefulness, rationality and good order during the appeal demonstrated the cultivators' high moral character.

Ms. Wang, a 73-year-old practitioner from Beijing, said in an interview that the April 25th appeal ten years ago remains vivid in her mind. "At that time, dozens of practitioners were beaten and arrested in Tianjin. We thought that we should explain the situation to related governmental departments, so we, in groups of two or three, went to the appeals office. We met many fellow practitioners from surrounding areas. We shared the same concern: to appeal to the government for a free and legal environment for our practice. We stood along the roadside. Some quietly read the book Zhuan Falun, and some did the exercises. The atmosphere was peaceful and harmonious. Later that night, upon learning that the practitioners in Tianjin were released, we left for home."

"Shortly after that in July 1999, Jiang launched a nationwide campaign against Falun Gong," Mr. Zhang shook his head and said, "I'm really puzzled. When I went to work, I heard my boss saying that there were more than ten thousand Falun Gong practitioners participating in the appeal, and when they left, there was not a single scrap of paper left on the ground. I thought at that time, no matter how the CCP smeared and suppressed Falun Gong, Chinese people are clear what is going on. Good and evil can be clearly distinguished."

A Chinese immigrant who passed by the event and watched for a while said that many misunderstandings in his mind about the April 25th event were cleared up. He said, "It is right to uphold one's basic human rights. Since the June 4th massacre, most people seem to have lost their enthusiasm, remaining indifferent to everything. Only Falun Gong [practitioners] strive for their cause on a daily basis. They are remarkable."

Mr. Huang, who is in his 60's, heard the music performed by the Divine Land Marching Band from his home nearby and came to find out more. He smiled and said, "In Singapore, if you tell people where they can find delicious food, they may show interest. Few people know 'the April 25.' Modern people are too materialistic. I'm so lucky today."

Some foreign tourists who came out of the subway were drawn to the event. They took photos, looked at the display boards, and asked for materials to learn more about Falun Gong. A Chinese worker from Jiangsu Province passed by the park and said that he has been reading the Epoch Times newspaper for several years, and he knows that Falun Gong practitioners are good people.

A local business man named Jack often goes to China for business and can speak fluent Chinese. He had been misled by the CCP media when he was in China. After returning to Singapore, he saw the Falun Gong practitioners' group practice. He was puzzled by why the Chinese government persecutes such a popular group. He got on the Clearwisdom website and read about a lot of persecution cases happening in China. In such a difficult environment, Falun Gong practitioners have remained steadfast in their belief. Jack told us, "I feel this is something true. I was a Christian and had strong conflicts with my sisters at home, so much so that we did not talk to each other. The priest helped me pray, but it was to no avail. I have believed in this Fa (Falun Dafa) for three months, and my sisters and I have reconciled. I wholeheartedly believe what Master teaches about looking within. I used to find fault with others. Also, my high blood pressure has gone down. This is the miracle that has happened to me! People need sincerity and society needs Truthfulness-Compassion-Forbearance!"

“Tension Prior to the Onset of the Persecution ”