On March 23, 2009, on the campus plaza of Southern Illinois University in Edwardsville, Illinois, students signed their names to support the mothers of local Falun Gong practitioners who are detained illegally in China because they practice Falun Gong. They expressed their kind wishes and hoped the innocent mothers would be set free unconditionally before this coming Mother's Day. 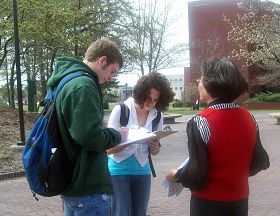 Practitioners collected about 400 signatures. One student said he couldn't imagine the feeling that one couldn't see his/her mother for several months, let alone several years, especially if they were detained in labor camp or detention center.