On March 1, 2009, a chilly day in Long Island, New York, Falun Dafa practitioners participated in the St. Patrick's Day parade in Bethpage. It was the first time for practitioners to participate in this parade. 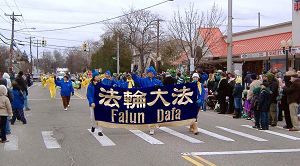 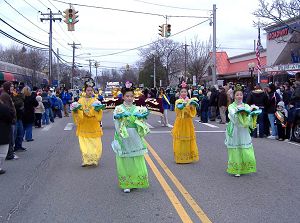 The celestial maidens and waist drum team in the Falun Dafa procession were warmly received along the 1.3-mile-long parade route. The music was fresh and exciting, and practitioners waved at the many applauding spectators. People smiled at the practitioners. Some called out, "Thank you!" in Chinese. Practitioners distributed fliers along the way. Some spectators pressed their hands together in front of the chests in respect.

It was the first time that many had ever heard about Falun Dafa. They showed great interest. Jack, one of the organizers of the parade, told practitioners he was very happy to have Falun Dafa participate in the parade. He was very grateful.

“Presidential Advisor in Taiwan: A Performance from the Bottom of the Heart (Photos)”