Legislator Lin Hung-Chih: Worth the Trip 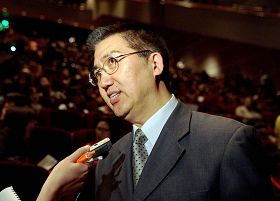 Legislator Lin Hung-Chih attended the last performance of the Spectacular. He said it was exciting and totally worth the trip. "The divine culture [of China] comes from heaven. No matter whether it was classical or ethnic dances, the power and beauty presented were truly moving. The shows were from heaven. They manifested the real Chinese culture. All of the numbers were marvelous."

Mr. Lin talked about the current popular music and dance. "It is empty, as if without roots. However Divine Performing Arts' Spectacular let me see Chinese culture immediately. People used to call China 'The Heavenly Nation' and I can only imagine how it used to be. Today, from the artists' performance, I felt it. From the bottom of my heart I identify with it and was very moved. I am very excited and I haven't felt like this for a long time. My thanks to DPA!"

Lin's wife liked the lyrics in the songs. "The phrases 'open the door to rationalities' and 'hope you see the truth early' really echoed in my mind. Many times in our lives we don't see the truth. I hope from now on I can pursue the hidden truth. The Spectacular also let me wonder about the mysterious universe and God's miracles. I believe there are miracles. Many thing we used to take for granted and thought they were done by men. In fact, there should be God's will in them."

Keelung City Council Member Lin Ching-Liang was glad that she watched the Spectacular because of the way the artists presented Chinese tradition and art through dance. "The entire show, especially the perfect combination between the artists and the backdrops, allowed me to see authentic Chinese art. The show let me to relax and simply enjoy and understand the message it sends out. I hope DPA comes back often." 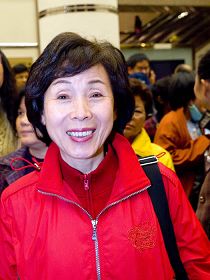 Lin thought the Spectacular isn't just art but has deeper meanings that are inspirational. "Their dances show the strength of men and softness of women. Besides the dances, the biggest inspiration was Truth-Compassion-Forbearance. No matter if they were in singing or dances, the performers have the kind of beauty that is out of this world and make me feel peaceful. The message allows me to face my life with courage and encourages society to be more peaceful."

Legislator Tien Chiu-Chin was happy to see the theater packed. "This year the show has more numbers with more variety and more cultural depth. The hosts were impressive. The DPA put in a lot of effort and shows people the depth of Chinese culture. The power of Falun Gong practitioners' hearts uniting together of course puts dread into the soul of the Chinese Communist Party (CCP). It is so frightened, the CCP had to go overseas to suppress Falun Gong. I believe the power of Truth-Compassion-Forbearance will [eventually] let Falun Gong blossom in China." 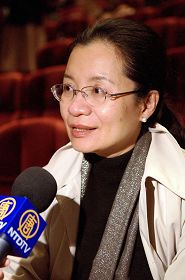 Tien felt sorry that people in China couldn't see the Spectacular. "If people in China could see such great culture and learn about Falun Gong, the society would definitely become a hundred times better than it is now. I feel that the CCP is all about the power of control and it worries that there will be a stronger power. This is why the CCP wants to control every thought and movement of its people. However, according to history, the power of pure benevolence will conquer evil."

The show was packed even during a financial crisis on Monday. Tien believes this was the power of Truth-Compassion-Forbearance. "The power of pure compassion is the best way to rectify people's hearts. Many lower-ranking CCP members didn't really understand what they were doing but simply follow a wrong and sham ideal. The Chinese people waste a lot of time and effort doing the wrong things. It is such a pity."

"If the time and effort of the Chinese people could be put towards righteous aspects, I believe China will become a respectful country. Now people in China can't see the Spectacular in their country and the CCP is still interfering with the Spectacular shows overseas. The CCP lies about everything to keep its regime from falling apart. However, history will prove it wrong."

“Chairman of Securities Company: "I Felt a Sense of Bliss" (Photos)”