Shen Yun Performing Arts opened its sixth show in Kaohsiung to a full house again. Audience members marveled at the spectacular performance and responded with loud rounds of applause. 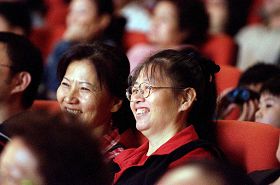 Audience members are delighted by the performance 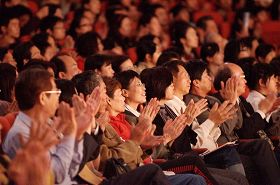 Audience members give rounds of applause

Mr. Lin Tiancong, Chief of Kaohsiung County Information Office was delighted after seeing the show. He commented, "Last year when I saw the show, my heart was deeply touched because I was very surprised that China's five thousand years of immense and profound culture could be presented through a show, in particular, in the form of artistic arrangement. Everyone seemed to have been brought back to a magical and dreamlike culture. It felt very good. It cleansed the mind, and that was good." 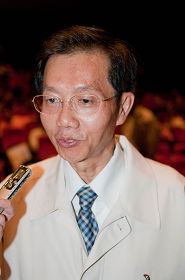 He added, "The performance integrated animation technology; ancient, traditional and modern culture. The costumes, artistic expression, and sound effect impressed me deeply. It's just so wonderful."

Mr. Lin indicated, "I was impressed with the program 'The Monkey King Triumphs.' I remembered very well that I used to see the character of monk Tang Sanzang from the famous Chinese literature 'Journey to the West' in books or dramas. The program gave a very good interpretation through artistic performance, combining with the effect of costumes and stage design. I was deeply impressed."

He continued, "This is a very good show that helps to calm one's mind. In particular, nowadays people are very busy and desperately lack spiritual things in their lives. I think the show can calm people's minds and help them let go of things that troubled them in the past, and take them to a dreamlike life of the ancient time."

City Councilwoman: A Feast of Beauty

Kaohsiung City councilwoman Ms. Chen Lina went to see the show with two friends. She said that it was a pity that her husband and son could not go because they went to see another performance. 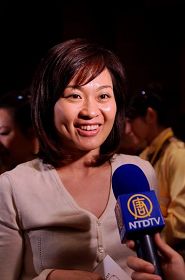 Ms. Chen was amazed at the show and said, "The dances were skillful and exquisite, and the music was good. I was charmed by the color of the costumes. This year the dances and the costumes are even more versatile. The color coordination of Shen Yun's performance is really extraordinary. That is why it was a feast of beauty when we watched the show. It was so pleasing."

Ms. Chen commented on her favorite program, "Yi Ethnic Dance," "The dancers' skirts had many great colors. Everyone danced like a butterfly, because the skirt was round when it was lifted and you could see different colors from different angles. It was just remarkable. You saw different color patterns as the angle changed. They were like butterflies when they moved, and like flowers when they twirled and turned. It was very interesting."

She continued," This is my second time watching the Shen Yun performance. Last year I only saw half of the show. This year I made the time to see the whole show. I brought two friends with me and we were delighted. Today's performance was magnificent. It was different from all the ethnic dances they have seen before. We were captivated. We all anxiously shared our views about the performance that just ended. We are really thankful to Shen Yun for coming to Kaohsiung every year, and we look forward for Shen Yun to come back."

Ms. Chen Xinyi is a pianist and piano teacher who is also the director of the New Classic Trio-Chamber Music Band. She said she had been planning to come see the show because some of her friends were very touched after seeing the show last year. When a friend invited her to come this year, she was delighted and brought her family to see the show with her. 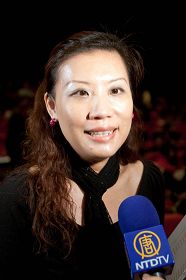 She said in excitement, "I majored in music and I'm also interested in arts. I'm using 'mind stirring' to describe my feeling. Because I was so touched--whether it was the costumes, or the music coordination, or the meaning conveyed by each program. "

She continued, "I think this is an integration of arts. I saw many elements, including media, music, dance and music composition. I think this why Shen Yun has been so well received and supported by people, because the integration was indeed just so perfect."

She was very moved by the program "Heaven Awaits Us Despite Persecution" and commented, "The steadfastness demonstrated by a man when he wanted to fulfill his ideal, although it might break up his family--it really touched me, in particular, he still fought hard to achieve his ideal under that condition. I was very touched by the strength displayed by his family and everyone at the end of the program."

Mr. Lee Tan, President of Taiwan Commercial Times, invited several friends to see the show with him. He said, "We came to experience five thousand years of Chinese culture together. It was indeed the best performance in the world. I was so touched. Compared to other international dance groups, this Shen Yun Performing Arts surpasses any one of them. The stage presentation and backdrop were so well integrated that they were real and alive. It was just perfect. After seeing the show I felt there is hope for China's five thousand years of culture. I was so moved." 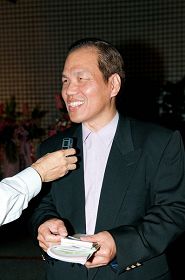 He especially praised the vocalists' performance and commented, "It just goes without saying that the tenor and the soprano were great. It was so rare and precious. The meaning of the lyrics was wonderful. It has been fifty years, and this is the first time I've seen such a performance. It surpasses any world class performance."

He continued, "Nobody can compare with their dances. Every movement and gesture was carefully created. The performers were all very young, however, their dance skills were wonderful and super good."

He was impressed by the message conveyed by the show. He commented, "I was impressed by the program 'Mulan Joins the Battle.' The depiction was vivid and lively. We all have read this story when we were kids. 'Monk Ji Gong Abducts the Bride' completely demonstrated what was written in the book, though without using any words, and yet every movement or gesture was great. Everyone was able to understand it and it was very educational."

Mr. Xie Sanhui, Director of Kaohsiung City Social Education Hall praised Shen Yun's performance, "Shen Yun's performance is world class, and it is no wonder that Shen Yun has been recognized everywhere in the world. I think it will have a bright future in promoting our Chinese culture." 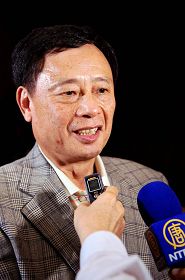 "From an artistic angle, I think Shen Yun has inherited China's five thousand years of traditional culture, in particular, some details in the dances were carefully designed and created. The dance skills were well recognized."

Mr. Xie said that he missed Shen Yun's first year performance when the performance was in Kaohsiung City's Social Education Hall. This year he made an effort to come see the show and he got so much out of watching it.

Mr. Lin Maolin, President of Kaohsiung Restaurant Union Association shared his thoughts after watching the show, "This is my first time. Wow. The show was so great. The backdrop and the stage integrated just perfectly. It was great."

He continued, "I plan on bringing friends to come see the show again tomorrow if I have time. You just have to personally come see the show to enjoy it. It really lives up to its reputation. It was very good. It's no wonder that they have arranged so many shows in Taiwan. It was magnificent."

Mainland Chinese: Very Heart Moving! I Was Moved to Tears

Mrs. Shao came from Jiangxi Province, China, and has been in Taiwan for more than ten years. She acclaimed, "Very heart-moving. This is the best I've seen so far. The dances were indeed dances of Truthfulness-Compassion-Forbearance, sending messages that moved our hearts. It was very touching. This is the best show I have seen in several decades and in my lifetime. It was so touching."

Mrs. Shao continued, "Shen Yun's performance inspires people. What a pity if you don't come see the show. Every program was very good. Their skills were indeed truthful. This means that what we have seen was the best. Some people were moved to tears. The two persons sitting before me were moved to tears. My mind was deeply moved, and I feel like I'm overcome with emotion."

She added, "Shen Yun's performance conveyed Truthfulness-Compassion-Forbearance, meaning that we should do good deeds and should help others. There were programs with Gods and Buddhas, and programs that meant to offer salvation to people. I was deeply touched. The show completely displayed China's five thousand years of culture through their body movements. This is true art."

Mrs. Shao said that many of her friends from Mainland had seen the show and that they will come see the show again next year if time permitted.

Ms. Nie is also from Jiangxi Province, China, and has been married to a Taiwanese for eight years. She commented, "The show completely demonstrated the essence of China's five thousand years of culture. I was so touched. Every program was very good. The music, costumes, stage backdrop, and the performance all touched me greatly. The artistic realm was very high. I have never seen anything like this in China. "

She added, "I felt like crying when I watched the performance. It was so touching. I especially enjoyed vocalist Guimin Guan's performance. His high notes were high, simple and vigorous. I'll come back to see the show next time."

“Finance Executive: 'I will recommend it to everyone' (Photo)”