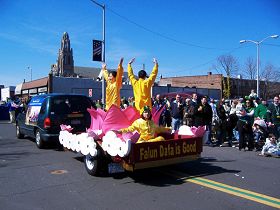 Tens of thousands of local residents watched the parade. The Falun Gong practitioners' float, celestial maiden dancers and drum team won frequent applause from the spectators. Many people took photos, and some asked for more information.

This is the second time that practitioners have won a first place award in Long Island. They had taken first place in the Miller Place/Rocket Point parade one week earlier.