Hsinchu, Taiwan: Former Member of the Hong Kong Legislative Council: Seeing Shen Yun Would Be a Blessing for the People of Hong Kong (Photos)

(Clearwisdom.net) Shen Yun Performing Arts International Company took the stage at the Hsinchu Municipal Performance Hall on the evening of March 22, 2009, amidst rave reviews and thunderous applause. The company will perform two more shows in Changhua County on the evenings of March 24 and 25. Mr. Tai Cheuk-Yin, former member of the Hong Kong Legislative Council, flew all the way from Hong Kong to Taiwan to see Shen Yun and said emotionally, "Shen Yun is indeed an exquisite performance. If the Hong Kong people have the opportunity to see this wonderful show, it would be a blessing for them. They would be able to gain enlightenment from it, and their inner world would be more peaceful." 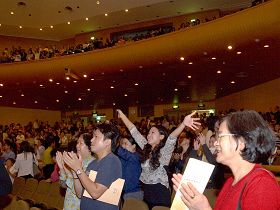 Person-in-charge of a dance school: It was so touching it brought tears to my eyes

Hsu Yun-hsiang, who is charge of Fengcai Dance School, attended the Shen Yun Performing Arts Spectacular show in Taiwan for the first time, and she was really amazed. She was impressed by the plots of programs, which allowed her to easily understand the inner meaning of the performance. She said emotionally, "The little dancer in 'Heaven Awaits Us Despite Persecution' cried so bitterly in the piece that she brought tears to my eyes."

Ms. Hsu is most familiar with ballroom dancing, and this was the first time that she had ever seen this kind of ethnic folk dance, which delighted her and gave her a very special feeling. She said, "Each and every performance was fantastic, every song was wonderful, and both the tenor and soprano sang brilliantly."

CEO of a gallery: I felt the warmth of the family

Mr. Fan is CEO of Hsinchu Gallery. His favorite piece is "Heaven Awaits Us Despite Persecution." The suffering of such good people's family moved him. He said, "A family was persecuted, and then Buddhas took the good people to heaven. I felt the warmth of the family."

Mr. Fan said he enjoyed every piece of the show: "I was engrossed in appreciating the show. I thought every performer's costume was beautiful and that the animated scenes and settings on the stage were very special. Contralto Yang Jiansheng was very impressive and fantastic."

He thought the show could raise society's moral standards and that we "should use 'Truthfulness-Compassion-Forbearance' to purify people's hearts."

Chairperson of the Hsinchu City Women Entrepreneurs Association of Industry and Commerce: "My heart was truly moved"

Ms. Lai Ying-zhen, Chairperson of the Hsinchu City Women Entrepreneurs Association of Industry and Commerce, said, "The strength and beauty demonstrated by the male dancers in the piece "Dragon Springs Drummers" were really marvelous. I attentively watched their hands hitting the drums and found that every movement was very wonderful. They indeed perfectly demonstrated strength and beauty. They were really great."

Commenting on the piece "Heaven Awaits Us Despite Persecution," in which a father is persecuted in China for practicing Falun Gong, a traditional spiritual discipline, she said, "My heart was truly moved when I saw them persevering in their belief, although the family was suddenly persecuted.

Ms. Lai said she felt that the presentation of artistically far-reaching, divinely-inspired culture conveyed the goodness of Falun Gong. She said, "I think they brought forth that kind of strength and vigor so everybody can naturally recognize and accept them." She also thought the performance played a role in uplifting people and purifying their hearts.

"The dancers fully displayed the spirit of the program. Every performer's facial expression was so fascinating and so natural. No wonder they are called Shen Yun," she said excitedly.

"In particular, the turning law wheel in the final piece 'Knowing the True Picture Offers Ultimate Hope' really touched me so much that I am at a loss for words to describe it. Anyway, I was deeply moved."

Chairman of an engineering company: Full of the Chinese nation's virtues of truthfulness, compassion and beauty

Hu Peng-fei, Chairman of Qide Lifting Machinery Engineering Co., thought the show was more fantastic than he had ever imagined. "When a man was being persecuted, his family members protected him, and his neighbors also came to help. It's our Chinese nation's virtue, and the meaning that the dance conveyed. The dance is really full of truthfulness, compassion, and beauty."

Mr. Hu had thought it was an American company when he initially heard the name "Shen Yun Performing Arts." After seeing the show, he understood that what the show conveys is the inner meaning of traditional Chinese culture. "The Shen Yun performance truly has 'Shen Yun' (divine charm) in it, which is conducive to uplifting people's souls. I hope the company will tour the world and let everybody learn what pure and authentic art really is."

Mr. Hu said, "The programs were full of Buddhas' and Gods' care, and highlighted merit in human nature. More of such artistry will have a positive influence on society."

Legislator Chiu Jingchun: Shen Yun presents the essence of 5,000 years of history and culture, full of God's will

Mr. Chiu said that every part of Shen Yun's performance was incredibly amazing and imparted the essence of China's 5,000-year-old cultural heritage.

He said, "I believe we can all, guided by God's will, fulfill our wishes as we live on with the ability to love. It's the love of mercy and the love from our hearts."

With the current financial downturn, people feel more anxious and insecure. Mr. Chiu suggested that Shen Yun's performance would awaken peace and happiness in society, because there are messages of caring and consideration for others in each part of the show.


Gu Suzhen, the legislator's wife, was delighted to enjoy the performance. She felt the importance of being compassionate and sincere. Ms. Gu added, "I have a very special feeling about being here. I feel that we really need to be more compassionate and more sincere to make this world a safer, happier, and more peaceful one."

Former Member of Hong Kong Legislative Council: It would be an inspiration for the Hong Kong people if they could see the show

Former member of Hong Kong Legislative Council Tai Cheuk-Yin made a special trip to Taiwan to see the Shen Yun Spectacular show. He thought the show was on a high level and the performers of international caliber. Shen Yun broadened his horizons. He added, "The costume designs were very special, and the arrangement of entire performance, and the messages conveyed filled me with strong feeling. More people should be able to appreciate such a wonderful show. This is something that needs our concerted effort and what we are looking forward to."

Mr. Tai praised Shen Yun highly, saying, "It is indeed very remarkable to be able to interpret the 5,000-year-old traditional culture so well in such a short period of time. People in China nowadays and those who have moved overseas should see this show, so they are able to carefully ponder their future. I felt it conveyed many important messages, which deserve deep consideration.

"Shen Yun's magnificent performance reminded us of China's prosperity in the Tang Dynasty as well as the tribulations people nowadays are suffering in China. What's more important is that it inspired us to think about our future and how to pass down the 5,000-year-old Chinese culture.

"In fact, each piece in the program is unique, from the opening act depicting the divinely bestowed culture ["The Five Millennia Begin"] to the Tibetan folk dance ["Dance of the Snow-Capped Mountain"] performed later. Every act was embedded with different meanings and implications. Every program was really wonderful. I really admire them, and I really benefited by coming here."

General manager of a company: The show can uplift people

Tsai Hseng-hsing, general manager of Xinhua Rice Noodles Ltd. Co. and Chairman of Hsinchu Rich Noodles Association, said the show made him feel peaceful. "It is gentle and soft and can uplift people."

Mr. Tsai was deeply impressed by the piece "Heaven Awaits Us Despite Persecution." He said that kind people may have many tribulations in their lives, but ultimately they will be with the gods. "Although this world may not seem fair, it does temper us."

Mr. Tsai was delighted to have benefited from seeing the show. He said, "In a chaotic world, we gained peace in a very short period of time, and I feel I'm closer to God."

“Berliners Deeply Moved By Shen Yun Performing Arts: 'No One Who Has Seen It Will Forget It!' (Photo)”