The Shen Yun Performing Arts International Company staged a second show to a full house in Hsichu on the evening of March 20, 2009 and again received high praise from the audience.

Vice President of a Leading Company in Electronic and Wireless Communication Products: "encyclopedia of Chinese history"

Mr. Cai Fu-zan, Vice President at Chengwen Science and Technology, and his wife watched the second show and highly commended the performance. 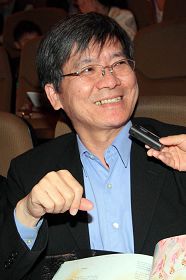 Mr. Cai thought that Shen Yun was like an encyclopedia of Chinese history, "Each paragraph describes a story and custom of a location, which impressed me. For example, there are programs on the Yi ethnic traditions and things from Tibet."

He continued, "A story is composed of a few actions, which are enough, such as The Monkey King Triumphs. That makes it easy for us to introduce to children."

Mr. Liu Yong-fa, former director of the Society Bureau and the Labor Bureau of Taoyuan County, said excitedly after watching the show, "I have never seen such a high level performance before. I saw an introduction about Shen Yun before on TV. But after watching it live, I found the performance to be superb. The other three people who come with me also have the same feeling." 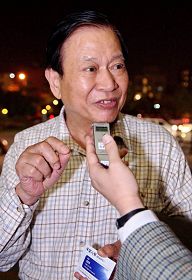 Mr. Liu said, "The dancers performed very well. The choreographers presented well-known stories, and everyone can understand it." He said that he understood Falun Gong more after watching the show, "I did not know much about Falun Gong before, though occasionally I saw Falun Gong exercise demonstrations. From the lyrics today, I seem to understand what Falun Gong tells us and deities tell us."

He continued, "One should behave kindly and according to the three words Truth-Compassion-Forbearance. I saw the three words before, but the dancing today presents the connotation of the words. I came to know more about Falun Gong. Today's dancing explained the meaning of Falun Gong. We should learn more about it."

Besides dancing, he also felt the songs were meaningful, "The lyrics shown on the backdrops help us to reconsider life. The host's introduction and the lyrics lead us reconsider where humanity came from and where to go, and how to behave well in this life, how to help others, and so on."

People flocked to the Hsinchu Municipal Performance Hall, including many faculty members of the nearby National Tsing Hua University and National Chiao Tung University. 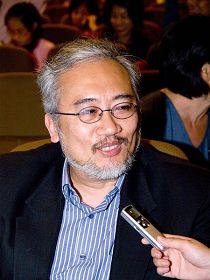 "It was a high-quality performance. The overall stage design was very successful. The images projected on the backdrops presented aspirations for a better life as well as the pursuit of a peaceful mind. In the meantime, it seemed to have elicited a long-forgotten memory," said Associate Professor Liu Ruey-Hua, Director of Arts Center at National Tsing Hua University, after the performance.

He said that Shen Yun's performance was unique and outstanding, as it not only combined traditional and modern artistic elements, but it also presented the Chinese nation's multicultural characteristics. He added that through the overall performance, the audience could feel Shen Yun's noble objective of carrying forward traditional Chinese culture.

Professor Liu said, "Shen Yun made me reconsider my life, for instance, how to make the world a better place and how to make interpersonal relationships become more stable and harmonious." He said after seeing the show that people could feel a kind of spiritual well-being, which could make them want to pursue spiritual peace and stability. This is indeed a high-quality and marvelous show based on traditional Chinese culture."

Mr. Sun Si-jiao, well-known children's music composer and educator, watched the show with his wife. During the intermission, Mr. Sun highly praised the music in the show. 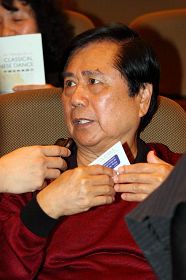 Mr. Sun thought that Shen Yun's music was natural and composed for dance, "The coordination of music and dance was very good. It is rare that the music was played and dancing was changed right away. Each piece of music was coordinated with the dance well. Each dance has a different action. The change of music along with the dance is really outstanding. In our eastern music, doing so is hard."

Beside the superb music composition, Mr. Sun was also impressed by the songs, "The vocalists have beautiful voices. The lyrics are well written with deep connotations and must have been scrutinized carefully."

“Professional Musician: "A Whole New Experience -- Each Performance Is a Wonderful Surprise" (Photos)”