The Shen Yun Performing Arts International Company premiered in Hsinchu on March 19, 2009. It was the last stop of six in Taiwan. Due to the audience's overwhelming requests, Shen Yun decided to give two additional shows in Changhua County on March 24 and 25.

Mr. Chiu Chui-chen, former member of the Legislative Yuan, told the reporter after the show, "The Shen Yun Performing Arts has put a lot of heart into the show. It showed the characteristics of the Chinese culture and the spirit of true beauty. If the Chinese Communist Party continues to persecute Falun Gong, it actually persecutes the Chinese culture. The world won't tolerate it. I am deeply touched by the spirit of Shen Yun!" 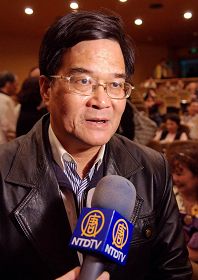 Mr. Chiu said, "Their performance is so professional and has such deep meaning! It showed the marrow of the profound culture! The dances are graceful! It was a combination of beauty and strength. The background, the costumes, and the dance movements are all professional and touching! The program was carefully planned. I saw the beauty of dance and the philosophy of Truthfulness-Compassion-Tolerance tonight. We should promote Shen Yun with all our effort. It will make our world more beautiful and peaceful!"

Hsinchu County Councilman Mr. Lo Chi-hsiang sang high praise of the show. "It is a great show! It is an extravaganza of Chinese art. Very classic! It combines dance, music and humanity. It is a grand show! I will recommend Shen Yun to my family and friends. The program I appreciated the most was 'Persecuted a Sacred Path.' It's a well-presented situation of persecution through dance."

Hsinchu City Councilor Ms. Zhung Shu-ying said, "It was the first time for me and my family to see the Shen Yun show. I am so happy and touched! I am most impressed with 'Persecuted on a Sacred Path.' I was touched to tears!" 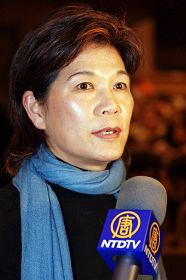 Dr. Yip Ming-chuen, vice president of National Tsing Hua University said, "It's a very creative show! It presented a tradition of ancient Chinese culture with modern technology, including many forgotten parts of the Chinese culture. It brought us a refreshing view! It is great!" 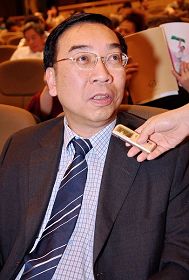 Dr. Chen Wen-hwa, Vice-Chancellor of University System of Taiwan, told the reporter, "The whole program is related to Buddha's salvation of sentient beings. The dances were very professional. The combination is very touching. The computer-animated background blended with the dance and created a great special effect!" 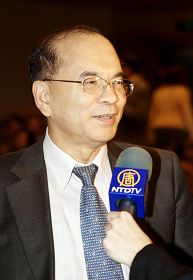 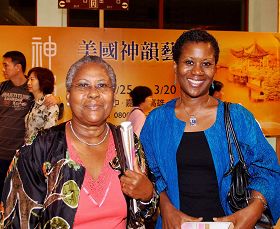 Ms. Jasmine Elise Huggins (right), charge d'affaires of the Embassy of Saint Christopher and Nevis, with her friend

Ms. Jasmine Elise Huggins (right), charge d'affaires of the Embassy of Saint Christopher and Nevis, said the show was very energetic and inspiring. She said she could feel the compassion, peace and harmony, and it showed rich and long origin. She said the songs were encouraging and the dances beautiful. It was a top-class show.