On the afternoon of March 15, 2009, the Shen Yun Performing Arts show won warm applause and cheers from the audience in Taiwan. Mr. Wu Hongzhang, renowned international musician, former director of Gaoxiaong Orchestra, and current director of the Taiwan Choir, was among the audience. He said he watches one or two Shen Yun shows every year, and each time he wants to see them again, as he is amazed and inspired by the show. Today, he invited members of the choir to watch the show with him. He was interviewed during the intermission and said, "Shen Yun has accomplished what artists pursue their entire lives." 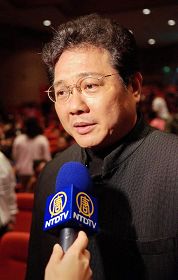 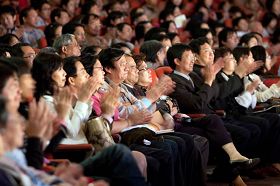 The audience absorbed in the Shen Yun show

The songs melt our hearts little by little

After watching the first half of the show, Mr. Wu Hongzhang said: "I watch the Shen Yun show one or two times every year, and I am amazed every time I see the show. Especially this year, I have an even deeper impression. I burst into tears seeing the firm belief of Falun Gong practitioners as shown in the program "Heaven Awaits Us Despite Persecution."

He said, "From the perspective of an artist, I believe that the first half of the show tonight was amazing. It is perfect from an artistic perspective. The production of the Shen Yun program is rigorous. One can see that it takes a lot of effort in both the dancing techniques and singing skills. I am touched every time I see the show. However, I think the most commendable part comes from the spiritual aspect. The rhythms of movement that fly from their hearts, and the truthfulness and compassion revealed--they are truthfulness, compassion and beauty from an artistic perspective. This makes it distinct from other artistic performance companies, especially the singers. It is not only the beauty of the sound, but also the spiritual elements, which can melt our hearts little by little. This is my deepest impression tonight."

Mr. Wu said, "I feel that Shen Yun is so brilliant. I'm lucky that I didn't miss it tonight. Wherever Shen Yun performs, many of my friends say they will invite all their friends to see the show because they feel the show is so vivid. So I am here to congratulate Shen Yun Performing Arts and cheer for them. The whole world sees their efforts."

Wu Hongzhang said, "The choreography is concise and energetic. Many of the dance pieces tell stories this year, such as 'Monk Jigong Abducts the Bride', and 'Mulan Joins the Battle'. For these programs, the audience can talk about them easily. This is the success of Shen Yun. This year, I have invited many students to the show in Jiayi, and most of them are from the upper classes. They told me the show is so beautiful, so touching, and every year the programs are brand new. They said that they will come again next year. Now I am bringing another team to the show here."

Wu Hongzhang said from the perspective of an artist, "I feel the show is very concise yet energetic. This is the main characteristic of Shen Yun. I feel today, after two and a half hours, I still want to see more, and at the end I don't feel that two and a half hours has passed. I want more."

Brand New Program and Successful ShowAfter the show, Mr Wu said, "Besides the perfection in skills, there is great choreography. A successful show should constantly entice the audience. What they see and feel should be continually changing. In two and a half hours, they need something new all the time, and you need to bring them mental sensations. During the program, "Heaven Awaits Us Despite Persecution," as I saw Falun Dafa practitioners being persecuted, I burst into tears. I think the Falun Gong exercises are very elegant, and the beauty is coming from the dancers' hearts. It is not just the movements themselves, but the real beauty is from their hearts. I feel after several years, both new and older dancers, they may have made further advances in their cultivation, as shown in their faces, which are so beautiful. In several minutes, the audience feels that Falun Gong indeed practices Truthfulness-Compassion-Forbearance. The show is so successful."

Wu Hongzhang said, "The main purpose of dance is to use movement to touch the audience. First it needs to give the audience the impression of its beauty. Shen Yun not only accomplishes this, but also has rhythm from the heart, which is a divine rhythm. The rhythms are from their hearts and intangible. As I enjoying the singing, and I even forget to applaud when the songs ended, because I was so moved. And the feeling--I can't express it. It is the rhythm that all the artists pursue."

Mr. Wu continued, "No matter whether they are singing, playing stringed instruments or dancing, techniques are absolutely necessary. However, even the artists with those techniques, why are only some of them popular? It's because these artists have their own rhythm. Regardless of the emotion, hope or expectations, they can display the feeling from their hearts. It is so natural that it becomes part of their lives. I believe that for a dancer, unless they are fully involved in the scene, they can't be good dancers. The Shen Yun dancers are so pure. This is the success of Shen Yun and it is also what other artists are pursuing. Therefore, in my opinion, Shen Yun Performing Arts is not only good at techniques, but also pure in heart."

Mr. Wu's students are all over Taiwan, from north to south. The "Prospect Chorus" formed by women doctors and very influential locally, attended the show in Jiayi. Wu Hongzhang said, "They highly praised Shen Yun. People will admire and promote Shen Yun after they see the show, no matter what their social status. I am an example today. I feel I want to salute and cheer all the Shenyun artists on the stage, and tell them 'We appreciate your efforts.'"

“Person-in-Charge of the Oslo Language Branch of the Goethe Institute of Liberal Arts: A Life Treasure (Photos)”