Shen Yun Performing Arts International staged its seventh and last show in Kaohsiung, Taiwan, on the evening of March 17, 2009, to thunderous applause. Two directors of two major photography associations in Kaohsiung praised the show but were sorry that they were not allowed to take photos of the show.

Director of the Photographic Society of Kaoshiung: The most delicate show I have even seen

At intermission, Mr. Chang Yi-Shan, director of the Photographic Society of Kaohsiung, and his wife, Ms. Huang Li-Ying, talked with excitement about the first half of the show. Mr. Chang said it was the most delicate show that illustrated traditional Chinese culture so vividly that he had ever seen in his entire life. He said he had heard friends praise the show before. When he got to see it in person, he said he believed Shen Yun lived up to its reputation. His wife loved the costumes and said that the 3-D backdrops were very beautiful. 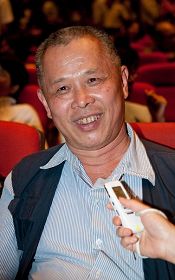 Mr. Chang Yi-Shan, Director of the Photographic Society of Kaohsiung

Mrs. Huang is the general manager of an automation company. She liked the repartee in the "The Monkey King Triumphs," Mr. Chang liked "Dance of Snow-Capped Mountain." But they both said "Heaven Awaits Us Despite Persecution" impressed them the most.

Mr. Chang said he had visited Longmen Caves and seen many Buddhas had no heads because they were destroyed during the Communist Party's Culture Revolution. He was very touched by the dance about courageous Chinese people with no fear of the Communist Party's persecutions. "Religion is a very important 'food for the soul' for human beings," he said. "Believers should not be persecuted." His wife was very moved by the scene of the Falun Gong practitioner being raised to heaven after being killed. She said it displayed heaven.

The couple also praised the dancers' high skills, decades of training, and the harmony among the performers.

Mr. Chang is famous for photographing characters. He is also an honorary doctoral member of the society. He said the show was a great inspiration for his photography and that it would be truly beautiful to portray body language in such beautiful costumes and lighting. He was sorry that it was not allowed to take photos of the show.

General Director of Kaohsiung Youngman Photographic Society: I Want to Take the Photos When the Curtain Raised 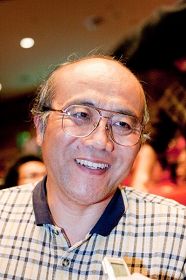 Mr. Hou said that, when he saw the artistry of Shen Yun, especially the conformity of costumes and the backdrops, he really wanted to photograph the scenes. Hou is famous for his landscape photography. He was very sorry that taking photos in the theater was not permitted.

He also said "Heaven Awaits Us Despite Persecution" touched his heart. "Deep in one's heart, everyone has compassion," he said. "(The dancing) enlightened the compassion in people's hearts, it also advised people to do good deeds."

He also had praise for the dancers' skills and intense training.

General Manager of a Book Company: A Delicate Illustration of Chinese Culture

Mr. Yang Bo-ming is the general manager of a well-known children's book company, Ai Chi Books. After watching Shen Yun's last show in Kaohsiung, he said he had long missed the dances and music that belong to Chinese culture, especially the music of Suo Na. He was very pleased to see Chinese culture displayed so vividly and delicately in the dances. 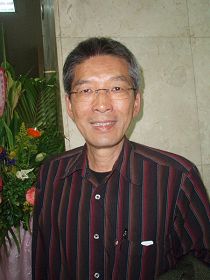 Mr. Yang is dedicated to good works and environmental protection. He liked the "Dragon Springs Drummers" for its strong flavor of manhood and liked the artistic mode in "The Poet's Vision." Compared to many world famous shows, Yang said he felt that Shen Yun had tapped into the very root of Chinese culture. "This belongs to our culture. It is what we are most familiar with and what we love most."

Ai Chi Books was established in 1978 based on the principle: "A Childhood of Love, Wisdom for Life." The press focuses on children's book for ages birth to 12, including a series of books on Chinese, history, geography, and science for kindergarten and pre-schoolers.