On March 15, 2009, a Falun Gong contingent composed of more than 150 practitioners took part in the annual St. Patrick Day parade in Toronto, Canada. The organizers praised their performance and the audience gave them a warm welcome. 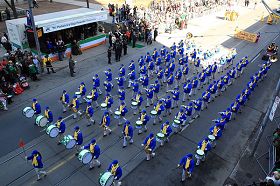 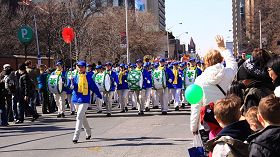 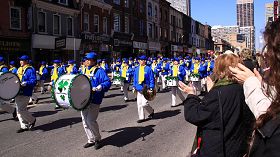 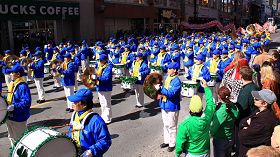 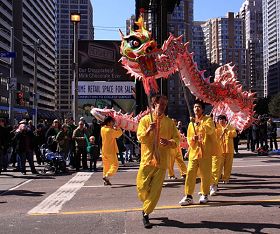 At noon, packed along both sides of Bloor Street in downtown Toronto, a dense crowd of people awaited the start of the annual St. Patrick's Day parade. Seventy-two entries participated. The Divine Land Marching Band and Dragon Dance Troupe composed of more than 150 Falun Gong practitioners were the final entry in the parade procession. Jack Fern, person-in-charge of the parade organization said, "They are the only Chinese group that takes part in the parade. Their performance was fantastic. I hope they will come again next year."

Mr. Fern told the reporter, "Today, the weather is terrific, and the audience is large. This is the first time the St. Patrick's Day parade in Toronto has had so many spectators. According to the estimation of the police department, there are 350, 000 spectators. I'm especially happy to see the participation of the Divine Land Marching Band and Dragon Dance Troupe from Chinese community. They are the only Chinese group, and I thank them for bringing the audience their style of performance."

Mark, a spectator who came to Toronto six months ago from San Diego, said, "I'm very happy to see such a large Chinese group taking part in the St. Patrick's Day parade. Their performance was exhilarating, and their dragon dance performance filled people with joy and excitement."

Maria is Irish. She said excitedly, "The band is fabulous and their performance was inspirational. I thank them very much! I hope they come every year."

Ms. Zhou moved to Toronto over two years ago from mainland China. Seeing Divine Land Marching Band, she was excited and took photos of them. She said emotionally, "This is the first time that I've seen such a large contingent of Chinese in a parade overseas, I'm very happy and impressed. I know Falun Gong, I'm happy for them to have such a freedom overseas. Their performance is very impressive."

Ms. Guo came to Toronto six years ago from Beijing. She said, "I'm so happy to see such a grand Chinese group participating in a local parade. They bring goodness to people in this free country. I'm proud of them."

Manny, person-in-charge of the Falun Gong Dragon Dance Troupe, said, "Seeing so many spectators give us enthusiastic applause and cheers, we were encouraged. Particularly, the Chinese spectators were very excited when seeing us. The Western audience members were also delighted, because the Irish people also like dragons. They were exulted as soon as they saw the Chinese dragon."

Annastasia, conductor of the band said, "Today, there were so many spectators. I was deeply moved and inspired seeing so many enthusiastic people enjoying our performance. They watched our performance attentively."

"This is the third year that the Divine Land Marching Band participated in the parade. There were so many spectators today that it was beyond our expectation." Jiang Fan said, "What's worth mentioning is that there were many Chinese spectators, and they were delighted. They applauded and took photos. The Western audience applauded enthusiastically, and we heard, 'Thank you' and 'Good job' from time to time."