On March 14 and 15, 2009, practitioners of Falun Gong (also known as Falun Dafa) participated in the St. Patrick's Day Parade organized by twelve municipalities from four different areas of Long Island, New York. They received high praise from the organizers and a warm welcome from the spectators. About 120,000 residents of Long Island watched the performances by Falun Gong practitioners' celestial maidens and waist drum groups. 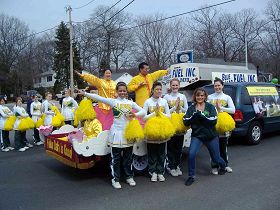 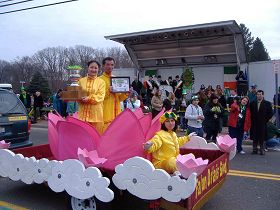 The parade in Miller Place/Rocket Point was the largest and traversed the longest route among the four parades held this weekend. The entire parade route was 3.5 miles. According to the person in charge of the parade, organizers said that more than 80,000 spectators came out to watch. He was very pleased to see Falun Dafa practitioners take part in the parade, and hoped that the practitioners will come again next year.

During the parades, many spectators waved and applauded, and took photos to keep such a beautiful and memorable moment. Many people shouted loudly "Falun Dafa," and some shouted, "I love Chinese people." Some high school students were delighted to have their photo taken with Falun Gong practitioners. Others ran to the practitioners asking for materials. Some imitated practitioners' exercise movements, and some Chinese spectators gave a thumbs-up gesture to the practitioners.