On the afternoon of March 8, 2009, the audience packed Huisun Hall at Zhongxin University during the sixth show presented by Divine Performing Arts (DPA) International Company. Zhou Xicheng, the director of the Zhonggang Region of the Affiliated Hospital at Zhongshan University and Chairman of the Love Sharing Promotion Association, watched the show with his wife and said the experience was similar to taking a pleasant journey that transcends time and space. His body, mind and spirit gained an experience similar to restarting a computer. 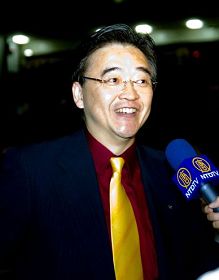 The director of the Zhonggang Region of the Affiliated Hospital at Zhongshan University, Dr. Zhou Xicheng

Zhou Xicheng said, "I felt that I was on a trip that transcends time and space. At one time, I was in a remote, ancient time, and at another time I was brought back to modern times. During my travel, I was able to enjoy the stories. It was so beautiful. The show emits enthusiasm, courage and hope."

He explained that in modern times, while there is so much struggle, trouble and desperation, the beautiful show and its profound contents take people on a journey transcending space and time. "After the show, I felt that the struggles and the troubles in my heart were swept away. In addition, I felt that I had gained fresh energy." He compared the experience to restarting a computer after repair and clean-up. He said the feeling was terrific.

"Therefore, I suggest," said Zhou Xicheng, "whether or not one is having struggles or other bad feelings in one's heart, it is helpful to watch the show. After watching the show, one will think about how to direct his life, maintain his enthusiasm, and walk toward kindness, which is very good."

Inspiring us to use wisdom to solve difficult problems

From the start of the first program, "The Five Millenia Begin," to the last one, "Knowing the True Picture Offers Ultimate Hope," all the programs gave Zhou Xicheng strong feelings. The program "Monk Jigong Abducts the Bride," which tells the story about Jigong using his wisdom to save villagers, touched and inspired him. He said, "The story is very good. It reminds modern people not to dig into the bull's horns. Currently, some people feel depressed about the financial crisis, and even do silly things." He said, "These people should learn from Jigong's wisdom. Don't go down dead end roads as there will be a time when things turn around.

Zhou Xicheng said he was so fortunate to watch this show and have such a good seat. He could see clearly the expressions of the dancers, and he felt wonderful, believing that this was his predestined relationship. His wife, Mrs. Zhou, said, "The show was super brilliant and moving." She felt as though her whole body was empty and she was absorbed into the performances. She said that every program was brilliant, especially in giving the sense of gentility that makes one feel renewed. The perseverance in the program "Heaven Awaits Us Despite Persecution" and all other programs related to "Truthfulness, Compassion, Forbearance" touched her deeply. "They are excellent and remind us that we should follow these three principles in our daily lives."

The Inspiration of Traditional Culture and Morality

The deputy director of Zhanghua Christian Hospital watched the show with his wife on the afternoon of March 8. The couple was touched by the program "Heaven Awaits Us Despite Persecution." Mr. Zhou Xianzhang said, "While I watched Falun Gong practitioners being persecuted [in this program], I felt it is similar to the Christian experience in history. We should have freedom of belief, and respect each other." 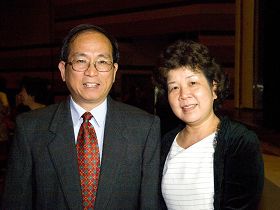 Zhou Xianzhang believes that the show uses dance to present traditional Chinese culture, which helps us assimilate Chinese culture and traditional morality, fostering justice and honesty. He praised the elegant dancing from both the male and female dancers. He said, "The costumes are very beautiful, and the energetic dancing of the male dancers is impressive."

Feeling the delight of living with Heavenly Beings 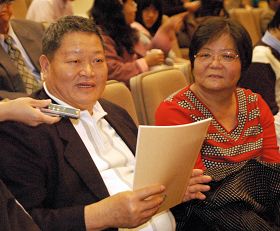 The president of Shunfan Fan Corporation, Mr. Chen Yuanxiang and his wife

Mr. Chen Yuanxiang is the president and Chairman of Shunfan Fan Co. He and his wife brought their son, daughter and daughter-in-law to watch the show on the afternoon of March 8. He said that the show was extraordinary and uplifting, and helps bring harmony to the family and society. Thus one feels happy after watching the show.

The program "Heaven Awaits Us Despite Persecution" touched him the most. Chen Yuanxiang said, "The father of the family was beaten to death. It appears that before the tragedy, this family was kind and harmonious. After the father was persecuted to death, the gods and Buddhas take him to paradise." He believed that kind people will be blessed by gods and Buddhas. This is the first time that Chen Yuanxiang watched the show. He said the costumes were elegant and beautiful, with the colors matching each other very well, and the dancing was very gentle yet energetic. He said he would recommend the show to his relatives and friends, and come back to watch it next year.

Mr. Chen Yuanxian's wife had seen the show before. She said, "The show is solemn, and we are so touched." She admired that the backdrops matched the dancing perfectly. The program "The Five Millenia Begin" reminded her of the origin of human beings. She said, "Nowadays, many people's lives are aimless. After watching the show, I feel that we are living with gods, which is a divine joy, and I feel very happy."

Mrs. Chen had previously studied ethnic minority dancing. She said that the dancers' fundamental techniques are proficient and the movements are elegant, which makes the show very enjoyable. The songs are inspiring and encourage people to search for the deep meaning of life. "The arrangement of the programs is naturally smooth, very touching." Mr. Chen Yuanxiang added, "It is very useful for purifying the mind." Mrs. Chen then said," I will try to promote the show."