(Cleariwisdom.net) On February 22, 2009, several Swedish Falun Gong practitioners went to the Chinese Consulate to show their support for the 50 million Chinese people that have quit the Chinese Communist Party (CCP) and its affiliated organizations. They also condemned the CCP for committing a variety of crimes against people in China and called on the world's people to work together to stop the CCP's over nine-year-long brutal persecution of Falun Gong 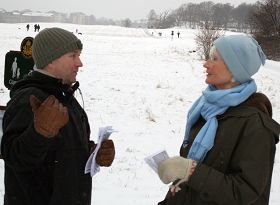 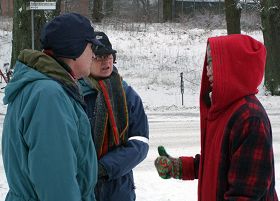 Practitioners explain the truth about the persecution to passersby.

Swedish people learned some facts about the persecution from the display boards. 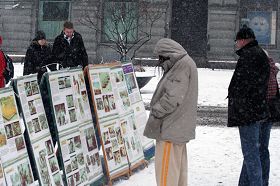 The Nine Commentaries on the Communist Party, which was published by The Epoch Times newspaper in November 2004, effectively exposed the evil nature of the CCP using verified historic facts. The number of the people who have since renounced the CCP and its affiliated organizations on the overseas Epoch Times website has now reached 50 million. This is a great historic movement, signaling that the end of the CCP is fast approaching.

It was sleeting and windy. The practitioners arrived at the Chinese Consulate before 10:00 a.m. They stood still, eliminating the evil factors with righteous thought in spite of the weather. Some of them clarified the truth to passersby, exposing CCP's countless crimes against Chinese people.

Many passersby stopped to listen. They also expressed their approval and support for the practitioners' activity. Several vehicles passing sounded their horns to express their encouragement and support.

In the afternoon, the practitioners went to the Mynttorget, which is by the royal court in Stockholm and a local hot spot. They laid out truth-clarifying display boards, hung up a banner that read, "Supporting the 50 Million That Have Quit the CCP" and continued to explain the facts to everyone.

Although the weather was not good, the people who learned the truth were not put off. Many of them were holding umbrellas as they stood in front of the display boards to read. A tall gentleman wearing glasses took a truth-clarifying flier and understood everything immediately. He then talked to practitioners. From Finland, he said that, as early as his grandfather's and father's generations, they already knew that the Communist Party was evil. He himself was also disgusted with the Communist Party and thought that it should never have come into being in the first place. He appreciated what the practitioners were doing. He also said he was willing to help them by informing more people about the evil nature of the CCP.

A Western practitioner, Mars, said that they had held the activity in order to inform more and more people about the real situation. He suggested that people read carefully the Nine Commentaries to gain a clearer understanding of the evil nature of the CCP. He advised all the Chinese people not to retain any unrealistic hopes for the evil CCP and to quit the CCP and its affiliated organizations and choose a bright future for themselves and their family members.

“Antwerp, Belgium: "I never heard such a voice before in my life" (Photo)”