Director of Government Affairs: Proud to Be a Sponsor of the Spectacular (Photos)

On February 8, 2009, Divine Performing Arts (DPA) gave its last performance in Memphis, TN, and received a warm standing ovation from the audience. 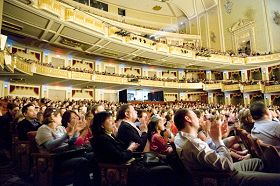 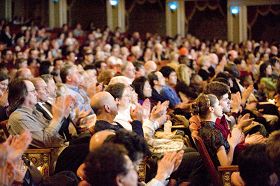 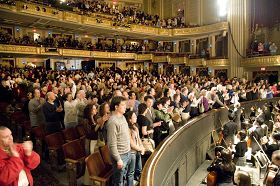 Standing ovation from the audience

Hotel Manager: Feeling of Peace and Calmness Drew Me In

Ms. Dalby, who works as a general manager in a hotel in Memphis, said that the peaceful music touched her and her friends. "We all hope to live in peace and own beautiful things. It's an universal value. This performance is a manifestation of beauty," said Dalby.

"The traditional culture brought me out of the everyday chaos and made me see beautiful things. It let you think there is art in this world. I enjoyed the splendid colorful costumes. The dances were graceful and soft. I liked the drumming program (Drummers of the Tang Court) and the program with the little girl (Heaven Awaits Us Despite Persecution). They made my heart jump," she said.

Ms. Dalby was most impressed with the dance in "Welcoming Spring."

"This program has cute costumes in pink and green. The fans they used is a cultural symbol and they played with the fans in many ways," she said.

In Welcoming Spring, the artists depicted how various flowers bloom during the spring time--the girls waved their fans in their hands and danced like flowers.

Director of Government Affairs: We Are Proud to Be a Sponsor of the DPA's Show 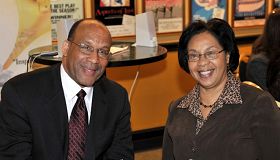 Mr. Brandon is a for Comcast Cable TV in Memphis

Comcast Cable TV is one of the sponsors of the DPA, and Mr. Brandon is the Director of Government Affairs for Comcast in the Memphis region. Mr. Brandon said, "It's an amazing show and everything including the dances, music and background are exquisite."

"As I sat in the theater, I felt China's rich history. I got to learn something about this history that has been passed down for thousands of years," he said.

"I represent Comcast and its 700 employees to welcome the DPA to Memphis. We are proud to sponsor such a performance."

Comcast has sponsored the DPA's performance in Atlanta for three years and in Huntsville, AL, for two years.

Newspaper Manager: Thanks to DPA for Coming to Memphis 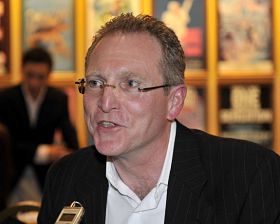 Paul Jewell is the manager of the marketing department of the Commercial Appeal newspaper. Mr. Jewell sat in the front and saw clearly the magnificent combination of the dancers, choreography, orchestra and singers. "The combination touched my heart." he said.

"I can't think of a particular program that is better than others. They are all terrific."

He said, "I saw singing, dancing and beautiful costumes can demonstrate history and culture. The brutal rule of the Chinese Communist Party shocked me and made me think."

"The show combines the most important things in life. I remember it said somewhere in a song (Awareness is Spreading) that truth dissipates the fog. I think at the spiritual level, China has a more profound culture than the West. I felt I can see things better and further after the show," he said."People should come to the show next year if they missed it this year. They will really enjoy it," Jewell continued.

"I want to thank the DPA for coming to Memphis. I'm thrilled that the DPA chose to come to Memphis."

CEO of Leadership Memphis: I Feel Steadfast Will 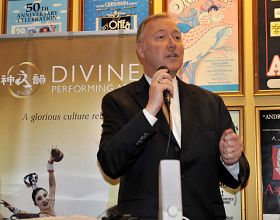 The CEO of Leadership Memphis David Williams said, "Everything is so graceful. It is indeed a spectacular show."

"Drummers of the Tang Court" was Williams' favorite, "I love drums and this program inspired me."

Williams said that he could feel a steadfast discipline and compassion from the DPA's performance, and he felt that this characteristic is what Leadership Memphis promotes and needs.

Owner of a Telecommunications Company: a Different Angle to Understand China 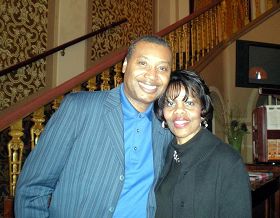 Mr. Synergy and his girlfriend

Mr. Synergy runs a company that provides telecommunication services to businesses, schools and hotels. He loved the Chinese classical dance, "The dances were grand. Choreography and the movements of the artists were graceful and beautiful. The dancers moved like they were walking in the air or floating on water. It's very different from what I have seen before. Very interesting."

Mr. Synergy's girlfriend especially liked the costumes, "I don't like the flashy clothes in other shows. The DPA artists' costumes are amazingly beautiful."

The background projection impressed Mr. Synergy, "It's an absolutely new experience, very creative. The artists blend in with the background, which is very unique. I loved the animation in the background."

"We learned what we never knew about China culturally. Through vivid singing and dancing, we saw Chinese ancestors' tradition and ideology," he said,

"The show also brought hope. When I saw 'Heaven Awaits Us Despite Persecution,' I felt that though persecution happens everywhere, hope does too."

"People in the world should know what happens in China now. It's a peaceful and wise way to tell through the channel of stage art. We can't change things if no one knows about it," he said.

"The show provides the audiences with many angles to understand China. Apparently the Americans are curious. It's great that they can understand the history and culture of China and what is going on there now."

He also praised the hosts, "They're humorous. They helped us understand the background of the stories and I don't have to worry that I can't speak Chinese. The translation in the background helped a lot as well."