On February 5-7, 2009, the Taiwan National Chiayi University Falun Dafa Club held a Falun Dafa Cultivation Experience Sharing Conference for young practitioners. The young practitioners improved their xinxing through the three-day conference activities that included Fa study, practicing the exercises, and experience sharing. They gained better understanding of the Fa, and also found their own shortcomings, enabling them to cultivate more diligently. More than one hundred young practitioners participated in the conference, from elementary school to college students. 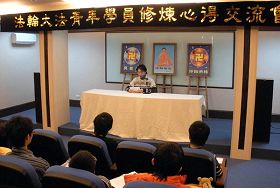 A young student shares his understanding of the Fa

Huang Weicheng (by pronunciation) is a senior student at the university and also the organizer of this activity. In the past he was always among the ones who merely attended such Fa-sharing conferences, but this year he has become the organizer. He became aware of the huge difference between simply attending a conference and organizing one. The latter required him to think more and be responsible for and to others.

The practitioners began the exercises at 6:00 a.m. After two hours of exercise, the day's activities of studying the Fa and sharing experiences and understandings began. Wang Jingya (by pronunciation), who graduated from National Chiao Tung University, indicated that this was a pure environment, and many people could share their experiences and understandings with others from the bottom of their hearts. She commented, "I feel that it was really good. The energy field was pure. During the morning sharing on the last day, several practitioners had tears in their eyes right after sharing experiences, and I could really feel the xinxing improvements from the bottom of my heart."

The uniqueness of this group of Dafa practitioners is their "search inward." The greatest difference between them and the other young persons in society is that they know they must search inside when they face conflicts or frictions in their lives. They know what they have done incorrectly and whom they have hurt. This helps them to improve their own xinxing and correct their shortcomings. Wang Linsheng, who graduated from National Central University said, "I feel that every practitioner is friendly with others, and there is no estrangements among the practitioners. Everyone conducts him or herself to be a good person, and that kind of feeling is very good. When conflicts occur, the practitioners know they must search inward, so there is rarely a situation that one complains about the others. So overall, I feel that the practitioners are purer than others in society, and they do not misbehave. Furthermore, they are on their way to being even better individuals."

Huang Weicheng also mentioned that the greatest benefit he gained from the three-day sharing conference was that he found his own attachments, and he now knows that he needs to cultivate himself more diligently from now on. Recalling his cultivation journey, he said, "Up to this point, my cultivation path has been full of setbacks and tribulations. Of course, I have already found many of my gaps, but eliminating these gaps has been slow. The three-day long camp helped me discover that this slowness has resulted from my having not paid enough attention to my own life, as well as from my being less than determined in my cultivation."

When asked why he chose to follow Falun Dafa and cultivate himself he replied, "I think this is my choice. After I read all Falun Dafa books I came to understand that the purpose of a person's coming to this world is to return to his or her true self. Otherwise, the person would continue the cycle of reincarnation until complete annihilation. Falun Dafa is the sole hope for the salvation of the world's people. After starting my cultivation I have become more peaceful, and my xinxing has become better than before. So, I have benefited much from my cultivation, and I deeply feel that Falun Dafa is really a great cultivation way that can save people."

As mentioned above, aside from eating and sleeping, the practitioners studied the Fa and shared understandings during the three-day event. This was a harmonious and compassionate environment, and every practitioner tempered his or herself in this environment, and could find his or her own cultivation gaps. Wang Linsheng has gained a much deeper understanding in this setting and said, "Compassion does not change with time. One will not waver in his or her cultivation, no matter what situations one faces. Even when one has done nothing, one should still be in a state of compassion. I can even more understand what Master has said; that is, compassion is something that one can only obtain through cultivation and is not "showing-off." I understand that to be an altruistic and unselfish enlightened being, one should start with the trivial things in one's daily life. Without this Fa experience-sharing conference, I doubt I could have acquired such a deep insight."

The three-day period passed quickly. The practitioners, having gained an even greater determination to cultivate themselves diligently, will return to their respective environments and continue doing what they are supposed to do.

The Chinese Communist Party's persecution of Falun Gong has already lasted nine years. During this difficult time, Dafa practitioners all over the world have made efforts to clarify the facts of the persecution to people, in hopes that more people around the world will learn the truth. The persecution is still happening. The evil, deceptive Chinese Communist Party is still lying and deceiving those who do not know the truth. This Fa conference has made the participants even more clearly aware of their responsibilities and missions.

Regarding this point, Huang Weicheng said emotionally, "Those who are deceived and have their minds poisoned by the lies, I want to genuinely tell you that Falun Dafa is a righteous cultivation way and the sole hope for mankind's salvation, as our Master tells us. Please, don't feel offended by Dafa practitioners' clarifying the facts about the persecution, because they do this truly for your benefit. Please, listen to and read more of the truth-clarification materials they hand out. As a result you will be choosing a good future for yourselves."