(Clearwisdom.net) The night on February 7, 2009 was the fifth show of Divine Performing Arts (DPA) International Company at the Universal Arts Center in Seoul. The audience was filled with admiration of the superb show, the gorgeous costumes, the far-reaching artistic backdrops, the animated content and the meanings of the programs.

Sculptor: Like Listening to the Teachings of the Buddha

Mr. Choi Byung Soo, a famous Korean sculptor and painter, enjoyed the show on February 7. He pleasantly said after the show, "It is as if I were listening to the teachings of the Buddha" 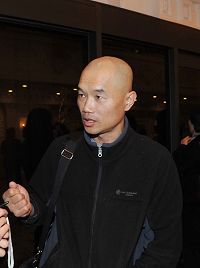 "I was impressed by every performance. The entire production was wonderful. The lyrics are great. The costumes are gorgeous and vibrant. The design of the backdrops was novel. This is the first time I have seen these kinds of backdrops." He said, "During the first half, 'Dance of the Snow-capped Mountain' demonstrates the young men's strength and the ladies elegance; the dance drama 'Monk Ji Gong Abducts the Bride' depicts Ji Gong, who foretold the future and saves the villagers with his compassion and wisdom. It was very educational."

The subject matter of Mr. Choi Byung Soo's paintings are mainly on social and environmental issues. The content mainly exposes the dark side of society. After he saw the show for the first time today, he felt he should paint more beautiful scenes from now on.

He said, "The show makes me feel a sense of true happiness and true teachings. During the show, I was seriously thinking: Are we lives from heaven? At last, when I saw the Buddha appear in the backdrop, at that moment, I felt a great sense of awe. I truly listened to the teachings of the Buddha."

Ms. Kim, head of a dance group named "Show," enjoyed the fifth DPA show in Seoul. She said after the performance, that the influence of Chinese dance left a deep impression on her.

That night, Ms. Kim watched the show with several of her dance students. She felt that the most impressive aspect of the show was the perfect combination of the performance of the dancers and the backdrop designs. "The dancers' facial expression as well as their skills impressed me, and especially the young men's dance moved me deeply," she said.

Ms. Kim stated that the performance and the backdrop design are so harmonizing and in unity, making the show all the more enjoyable. The costumes and lighting was also beyond human imagination, she said. The story-based legends reflected many current social issues, "It was a very meaningful performance. In 'The Poet's Vision,' the stage setting and the backdrop blended so well together. I think young people must watch this kind of show."

"In this theater, I have learned a lot." Ms. Kim said, "I would also like to try [to create] similar programs based on DPA's inspiration."

Dr. Choi, Chairman of the Korean Regional Development Foundation and a Doctor of Science, watched the show and said, "Overall, this show is a magnificent production. The technology of combining backdrops with the stage setting is very unique. It also closely links the present affairs with history. Preparing for this show must have taken quite some effort."

Dr. Choi said he saw the show last year as well. However, he was not able to enjoy the entire show due to some meeting conflicts, "This time I came again."

Dr. Choi, Chairman of the Korean Regional Development Foundation, and a Doctor of Science: "This is such a grand show. I hope more young people will come to see it."

Dr. Choi said, "All of the dancers worked really hard. The singers sang great lyrics. I think they are all high-caliber artists. Soprano Yao Jiansheng's voice was very unique. When she started singing, I was astonished. She has a great voice. I felt great listening to the song."

Dr. Choi suggested, "This is such a grand show. I hope more young people will come to watch this show. But very few young people are here today. They should see this kind of show and understand the traditional culture."

Dr. Choi said, "No human being can control what happens in this world. Therefore, we should not forget the presence of the divine. We should be respectful and listen to the words of Gods."

Property Successor of the Korean XV "Lions Games": Magnificent Scenes beyond Our Imagination

Mr. Lee, successor of the Korean XV "Lions Games" came to the show and said excitedly, "The magnificent scenes are beyond our imagination. It was so refreshing. The trip was well worth it to see the show."

Mr. Lee thought DPA's costumes are so different from Korean clothing. He found the costumes to be very elegant, clean and simple. At the same time, he felt that "the backdrops are so special. Overall, it was wonderful. For example, when the actors appear on the backdrops and then disappeared. It deeply impressed the audience."

He thought that every dancer worked very hard and performed outstandingly. He said he would tell his students, "I hope the 'Lions Game' participants work as hard as the DPA performers so we can continue to grow and develop."

Member of Parliament: Chinese Culture is the Origin of Korean Culture

Mr. Choi, a Member of Parliament, said after the show, "Five thousand years of traditional Chinese culture has a deep relevance to the Korean culture. In the current society, there are very few opportunities to watch this kind of performance."

He said, "The theme of traditional dance is very moving. Koreans can also understand the connotations of the DPA show. It felt very peaceful and inviting. Through today's performance, I could feel the origin of our traditional culture. This is very meaningful for us." He said that in terms of rhythm and themes, the traditional Chinese culture is the origin of traditional Korean culture.

Mr. Lee, South Korean's last Emperor's Great-Great-Grandson, President of the Republic of the Korean Cultural Foundation, was deeply moved by the show. He said, "It appears that we should learn more about China."

Mr. Lee, South Korean's last Emperor's Great-Great-Grandson, President of the Republic of the Korea Cultural Foundation, was deeply moved by the show.

"I think the dance, 'The Poet's Vision' as well as the drama dance 'The Monkey King Triumphs' are very interesting." Mr. Lee thought that the DPA show was very refreshing and exciting. He said, "Normally, it is not easy to stay connected with Chinese culture. I am really touched by the DPA show. I feel I should develop more cultural exchanges with Chinese culture and I should watch more of these kinds of shows."

Mr. Lee used to be a well-known singer. He was impressed by the vocalists' lyrics and performance, "In those songs, it kept mentioning about the reincarnation of lives, which gives people much to ponder and makes a deep impression."

Head of an Association of North Koreans: A Very Beautiful, Pure and Sincere Performance

Mr. Han is the head of an association of North Koreans: 28 groups including the Christian Social Responsibility, North Korean Christians United Association and Salvation of the North Korea Policy Institute. After the show, he said, "This is my first time watching the DPA show. This is a very beautiful, pure and sincere performance. It is astonishing to see the difficult Chinese classic dances based on five thousand years of profound Chinese culture." 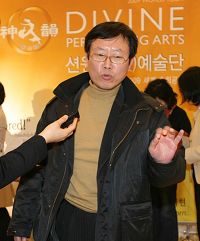 Mr. Han, head of an association of North Koreans: the Chinese Communist Party (CCP) should stop the persecution of the spiritual movement and its despicable behavior towards the Chinese people.

As for the story of Falun Gong practitioners being persecuted to death by the Chinese Communist Party (CCP), Mr. Han can completely relate to his own experience in North Korea, which is ruled by the North Korean Communist Regime. He said, "The CCP should stop the persecution of the spiritual movement. It needs to stop its despicable behavior towards the Chinese people."