The DPA show transcends time and space, bridges diverse cultures, stands undisturbed by chaotic world affairs, and provides the audience with a wonderful evening. At the end of the show, audience members gave the performers a standing ovation. Some expressed their appreciation by bowing and showing Zen hand gestures. Many were reluctant to leave, and talked and shared their joy and excitement.

Many of the spectators came from business and arts circles. They had high praise for the DPA's outstanding artistic achievement. 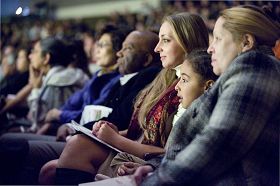 Former Russian ballerina Nina Belogorskaya said, "The DPA show is very beautiful and spectacular. From the beginning to the end, I loved every second of it. My daughter and granddaughter also loved it very much."

Speaking from her rich experience as a ballerina, Ms. Belogorskaya had only good things to say about the Chinese classical dances. She felt that the sophisticated movements not only demonstrated very advanced techniques, but also the beauty and elegance of Chinese culture. "The movements were smooth and unbroken and the artistry was clever. The whole show was very Chinese. It was a good illustration of the Chinese spirit."

Ms. Belogorskaya was surprised by the expressive nature of the colorful dances. She felt that the stories and the characters were very alive. More importantly, in her opinion the cultural connotations and the philosophy behind the stories were incredible. "It is hard to imagine that a simple move or several movements could so wonderfully portray the deep emotion and meanings behind the story. The thinking behind these movements must be very profound and full of philosophy."

From the Chinese dances, Ms. Belogorskaya could see the true nature of the Chinese people, "They are not only beautiful, dignified and elegant, but also compassionate, gentle and resilient."

Bob, a former manager of a large department store, and his wife wished they had a larger vocabulary to describe their love of the show: "Wonderful, outstanding, perfect, splendid, fantastic."

Bob said, "Tonight was an experience full of joy. I felt so comfortable during the show. The DPA show brings happiness and beauty to life."

Bob's wife said that she could not adequately describe her feelings about the show. "The Chinese classical dances were so graceful and expressive. The color, the light, especially the costumes were simply the best."

Both Bob and his wife also appreciated the show's message. They thought the message was very real and important.

Technology Company Consultant: I was so excited to see the show 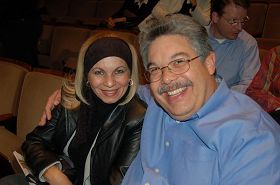 Mr. Mike Baez is a business consultant at a global technology company. Recently, he traveled to Dallas from New York on business and bought tickets for the DPA show. He and his wife Margret were both very delighted with the show.

Mr. Baez said, "This was a fantastic show. It presented a very ancient history and culture. The show also contained some beautiful messages. It was indeed very exciting."

He thought the colors used in the show were simply gorgeous and breathtaking, and the musical presentations very elegant and appealing. Asked about the "beautiful messages" he mentioned, he cited the pieces about good people being unfairly persecuted for their spiritual belief and said that this was an important message in the show.

Mr. Baez said that he was not familiar with the facts of the persecution, but he would definitely pay more attention to it now. He said that the principle of "good people will be rewarded and bad people will see retribution" was a significant teaching that he would remember forever. "To good people this is wonderful news," he said. "The show has accomplished a lot--my time spent here was so pleasant."

Texas State Representative's Chief of Staff: Everything was so amazingly harmonious 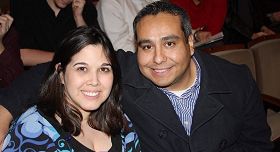 Texas House District 107 Representative Allen Walter's chief of staff, Frederick Lopez, and his fiancée, Dr. Aimee Garza, attended the final DPA show in Dallas on February 4. They had not seen Chinese classical dance before, but were mesmerized by the storytelling and the historical background of the show.

Dr. Garza said with a big smile, "The show was simply so beautiful." She said she always liked dances, but today's show deeply touched her heart.

Mr. Lopez said, "The DPA show gave me an opportunity to learn about the Chinese culture, the tradition of the New Year, and related stories. The costumes, the color, the program production, and everything else was so amazingly harmonious. Especially the dance 'Welcoming Spring.' It makes people feel like spring is coming." Dr. Garza's favorite piece was "Drummers of the Tang Court."

Both of them thought that the hosts did a good job introducing the programs. The audience gained a better understanding, not only of the show, but also about Chinese culture.

Ms. Elena Ivarra and her husband sat in the front row near the orchestra pit. At the end of each program, they always gave long applause. Ms. Ivarra is a senior manager in the biggest telecommunication company in the US. She has served in the company for more than thirty years. Her responsibilities include feasibility studies of new customer services and standards setting.

According to Ms. Ivarra, this was the first time she had attended a show like this, but she felt absolutely sure that the show was a "five star" performance. She said, "The ideas and the various emotions expressed in the show are very rich. The colorful costumes and backdrops, together with the drumming sound--everything is so exciting and delightful."

She was also impressed by the expressive power of the dances. "They are just extraordinary." said Ms Ivarra. 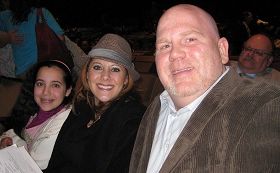 Senior stock market analyst and investment advisor Carl told the reporter that the show was very spectacular and beautiful, and that it conveyed good messages. He found the show exciting and uplifting. He also said that he thought every program reflected a unique perspective, which was especially impressive. For example, he had a special liking for the "Drummers of Tang Court" and thought that the dance successfully portrayed the manly spirit and dignity of the Chinese men, which he found very uplifting.

Using poetic language, Carl said, "The DPA is a ray of sunlight. It gives us power and direction. It's a fresh stream that cleanses our troubled souls and gives us serenity and peace. During the current economic crisis, we especially need a sunny, peaceful, and optimistic state of mind."

Carl's friend Keshet is a beauty consultant. She also enjoyed the show's beauty and positive messages. She liked every program, and thought that the entire DPA show conveyed a bright, magnificent spirit. She said the girls were like fairies and angels, that their smiles were so pure and clean. "That kind of beauty is not something we could create using cosmetics. Their beauty was a radiating spirit, a complete unity of body and mind." Keshet said that she could feel that their dance movements reflected their inner peace, delight, compassion, and harmony.