Richard Basciano is the owner of Times Square Art Center. "I am very, very impressed with your culture and what you people are trying to do! And I am sure it will spread throughout the world. It's very entertaining; thank you for having us. I was pleased to come to see it. It was very, very enjoyable! And I'll tell my friends [about it] as well."

When asked if he had a favorite segment in the show, Mr. Basciano replied, "It was spectacular when people were [transitioned from the sky or background] to the stage, and the colors were spectacular. Everything was done in good taste. Very exciting!" He added, "This was unique in the style of it. And it's really wonderful what they're looking to resurrect the culture that's been missing for so many years. I thank you for having us. God Bless!" 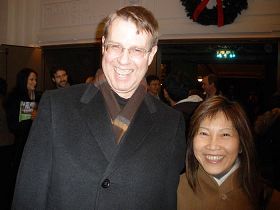 David Titus and his wife Jennifer

David Titus, who works in Marketing for IBM, attended the performance with his wife. He said of the show, "It was a very nice performance! I hadn't seen any traditional Chinese dance before, but it was quite good. The performers were excellent, and I would enjoy seeing it again." About the 5000 years of Chinese culture showcased in the performance, Mr. Titus said, "It's educational, and you learn something about the long history of China and the values of Chinese society, how they value learning, and they value [filial piety] toward the parents." He added, "the art forms are quite beautiful." 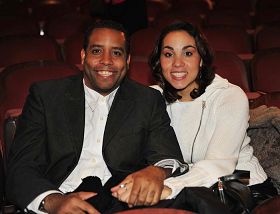 Mr. Lance Carsello is writer/director for the film "Public School Dreams" that is being made at the Times Square Art Center. Joanna Hughes is a professional dancer and one of the producers of the film. Both had lots to say about the DPA show. Joanna said regarding the dance, "I am a professional dancer; so I have an eye for it. I thought the formations were fantastic! I thought the dancers were obviously trained and have been rehearsing for a long time, and you can tell. And what I notice about productions like this, it is not necessarily about their abilities, but about their emotion and how they're excited to be on stage and performing. And you could feel their love and emotions, and that carries through more than their extensions or the number of pirouettes they can do."

Mr. Carsello added, "Yes, I think the beauty of this type of choreographed show is the diverse... the energy, the colors, the conceptual format. And yes, a very strong faith in belief. It makes you think you are at a 3-D animation--the screens, the colors, the transformations of the different images make you feel you are part of the show. And it gives you that hope of being focused - to where you can have more out of life if you believe... and that's the wording that they kept showing us in the lyrics of the songs - believing in what you say and staying focused on the bigger picture in life."

Christopher, an opera singer, was asked about the singing in the show. He said, "Pronunciation and phonetics are different, but the feeling in the singing is the same, and the technique is the same. Everything is beautiful, the music, the costumes, and it leaves a beautiful impression! It's excellent!" He then commented on the dancing in the show, "And they show the Chinese folk dance. And they have a high level. Beautiful, everything is together and connected. They demonstrate beautiful dancing. Wonderful! It has left a very good impression on me."

When asked if he got a sense of the culture, Christopher replied, "Oh yeah! This is excellent, a panorama of China. And they dance in connection with the [background], I think it's to show the beautiful picture. What I have learned is about Falun [Dafa]. I would be interested to do that myself--to learn something more about it. And for mind and body, it's excellent."

“Brooklyn Banker, "It's Like a New Future for China!" (Photo)”