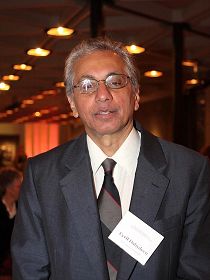 Dr. Dabydeen was truly grateful to DPA for bringing Chinese dance and culture to Ottawa. "It's such a wonderful experience," he said, "I find that the dances have all the energy and the tumbling movements of the ancient past, of the great Chinese civilization."

"For me it's an overwhelming experience--to be able to appreciate the ancient and great Chinese culture--which ordinarily you wouldn't have the chance to experience ... to understand and appreciate," he said.

"It's Such a Wonderful Experience!"

Dr. Dabydeen is hoping that DPA can perform in Ottawa at least once a year. "It's such a good thing because you have such a packed audience and everybody is learning and enjoying traditional Chinese culture ... past and the present ... it's great talent that we see before us."

When asked what part of the show he liked best, he replied, "The dancers' skill is the best you can find. The dancing, of course, you can't beat that. The great choreography we see in action, it's such a wonderful experience!"

He continued, "The costumes, of course--nothing to criticize. But in order to appreciate the joy of it, the quintessence of the various movements, male and female: the agility and strength of the men, and the gracefulness of the women ... it's just beautiful!"

When the reporter asked him what message he got from the first half of the show, he replied, "The message I take away is ... about what's going on in China today. It's a Communist country and maybe the past is not appreciated fully enough. And we see the DPA really and truly in action--bringing the morality and the values of the past, which human civilization around the world should never forget and overlook, no matter how much materialistic progress we make."

"Compassion and humanity are very uplifting overall. Great warmth and human spirit, our tremendous compassion for one another, for all human beings, Chinese, non-Chinese ... people around the world. That's the great message of what I've seen in the first half," he said.

During the various shows and performances he felt as if he were watching the "divine spirit in all of us." "I felt I was in a different world almost, a spiritual and quintessential world," he said.

"I Rank This Show Extremely High, the Very Best!"

When asked how the DPA compares to other shows he's seen, he replied, "I rank this show very, very high, among the very best we've seen in Ottawa, over the many years at the National Arts Centre. I knew the DPA performances are all primarily from New York City, but that makes it even better because you get the opportunity to enjoy the great talent and skills of North American Chinese. So I rank this show extremely high, the very best!"

He mentioned that each DPA show that's he's attended so far, has been different from the previous one. "It's like a brand new show and I do enjoy the singing by ... the soprano at the beginning and then the male singer afterwards. The singers were so beautiful."

Dr. Dabydeen was very moved by the spiritual and moral aspects of the show, saying, "The tumbling techniques in 'The Monkey King Triumphs,' the 'Dragon Springs Drummers,' and the 'Flowing Sleeves' were wonderful. But overall, it is the wonderful ancient and current spiritual values among the Chinese people--which are communicated to us who are not Chinese and to people all over the world--wherever these shows are taking place ... I find that very uplifting."

He continued, "Very spiritual ... and when you look at the lyrics of the singers--and I look at the words carefully because I'm a poet--I made a link and a connection in my own spiritual and poetic mind. It is something very ennobling. These transcendental values in all of us makes for a higher human self."

“Canadian Airman: "Something we haven't seen before" (Photo)”

“Canadian Official: The Unwavering Stamina the DPA Portrayed Is Moving”