On January 2, 2009, the Divine Performing Arts New York Company staged its first show in the National Arts Centre in Ottawa. Doctor Rome and his wife Laura were among the appreciative audience. 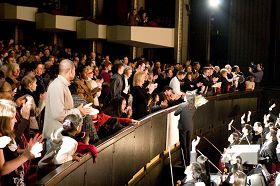 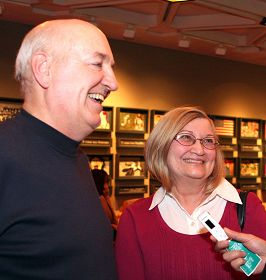 Doctor Rome and his wife Laura

The couple were impressed with the colors in the show. Rome said that the show was fantastic and it was incredible that so many colors were shown on stage.

He continued to say that you could almost feel the nature, feel the growing grass and see the flowers blooming. It was very graceful.

Rome said, "You can understand the history and culture. Very peaceful and serene. The show lets you feel serene."

He continued, "We are very happy, more than expected. We will come back to watch it again with our daughter."

The tickets for the first show were nearly sold out. Many audience members said that they would come back to watch it again with their family and friends.