Ms. Luo Zhijian of Tangshan City, Hebei Province, was sentenced to jail for three years at the beginning of December 2008. She was imprisoned at the No. 1 Detention Center. During that time she was beaten by prisoners and treated cruelly by a female officer from the court. She was forced to wear handcuffs and shackles for three weeks. She was also fastened to the "dead person's bed" for an entire day. 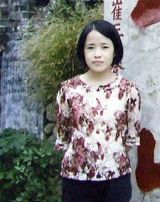 On December 9, 2008, Ms. Luo's case was being heard in the Lubei District Court of Tangshan City. Evidence had been destroyed and forged statements were used. On that day, two female officers from the Lubei Court and the Tangshan City Intermediate People's Court were assigned to take Ms. Luo to the court from the No. 1 Detention Center. Before taking her to the courthouse, they allowed prisoners from the No. 1 Detention Center to beat her. The two female officers also choked her, almost killing her, and they kicked and punched her. Ms. Luo was bruised and scarred. When court was in session, these two officers stood right behind her.

After her court appearance, Ms. Luo was returned to the No. 1 Detention Center. To protest the illegal proceedings she had been subjected to in the courtroom, everyday she called out, "Falun Dafa is good!" Everyone in the center heard her. When she started to call out, the guards ordered prisoners to drag her into the washroom and throw her on the floor. Some pulled her hair and others kicked her. Large clumps of her hair were pulled out. She was handcuffed the few days before going to court and shackled the few days before January 4, 2009. The two weeks in between she was kept in both handcuffs and shackles at the same time. In total she was chained for three weeks. In the end, the shackle mechanism broke and the lock wouldn't opened. The guards had to saw them off. Ms. Luo was fastened to the "dead person's bed" for an entire day. She was only let off the day the verdict was delivered (December 24, 2008).

Ms. Luo was sentenced to three years in jail. She sent her appeal to the No. 1 Detention Center on December 30, 2008.

Since July 6, 2008, Ms. Luo has been transferred to three different cells. She is now in cell 505. There is an assigned prisoner in the cell with her. When she ordered Ms. Luo to do the labor required, Ms. Luo refused. She then forced Ms. Luo to be on duty from midnight until 4 a.m. or from 2 a.m. to 6 a.m. while others only worked two hours. Ms. Luo did this for almost two months. All the guards in the No. 1 Detention Center were aware of this but they turned a blind eye and couldn't have cared less.

Ms. Luo Zhijian went on a hunger strike for several days after her court appearance to protest being beaten by the officers. Now she has started to eat again. In the morning all she gets is corn congee, while for lunch and dinner she will only get a steamed bun and a bowl of vegetable soup.

“Experience the Wonder of Dafa Cultivation”