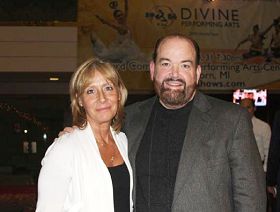 The DPA Brought a Unique Experience to Our Community

Dearborn mayor, John B. O'Reilly, Jr, and his wife, Christina, attended the DPA which was held in their home city. When a reporter asked the mayor what he thought about the show, he said, "I'm so proud that it was here in our community, that people around us can share in this experience ... and the spirituality [that] I love, and the sheer beauty of it ... This [DPA] really brought a wonderful, unique experience to our community."Â Asked if he would consider having the DPA return next year, the mayor enthusiastically replied, "I sure hope you do (come)! Like I said, that's why we built this; we wanted this theatre to attract some of these great performances like we saw tonight, so our community could be enriched."Â

He continued, "So this is wonderful, it was great for our city, and great for the people who live here ... We will certainly make sure that we give them [DPA] something from the city ... thanking them for coming here and bringing the show to us, because that's how we feel, so we'll make that formal."

"We Really Loved it. It was a Great Show"Â

Mayor O'Reilly talked about the diverse elements of Chinese culture and how they were masterfully woven throughout the show. "Well, we really loved it, it was a great show. And what I really appreciated was the diversity, even within the performance, in terms of how culturally diverse China is and how it is displayed in so many ways. And the narratives helped everyone in the audience understand the nature of what we were seeing, and what the relationship was between the dance, or the song, and what the historical significance was."Â He felt the combination of the stage work, backdrop, and dancers complimented and enhanced each other. "Oh, it was great. And I was very proud of the way that it was done. It was so dramatic, and it had such scope. It took up the entire [stage] space, and it just filled your eyes. And the use of the animation, and the screen [backdrop], and how the animation and the real characters played into each other was really beautiful staging, it was really well done."Â The mayor particularly liked "The Udumbara's Bloom" dance saying, "It was just so beautiful, I mean, it was gorgeous. Matching the image with the flower on the screen with the dancers, and how they became that blossom, became that flower- that was one of the most beautiful things I've seen! It mixed so many different things. It was just really a delightful thing to see, and hear, and be part of."Â Â

The Show Had a Great Spiritual MessageÂ Â

Mayor O'Reilly felt that the spiritual nature or essence of the show was most significant, saying, "I know there was a great spiritual influence here, and I thought that it came through, certainly in the singing-they were all beautiful, all three, the baritone, soprano, and tenor, all sang beautifully, and had a great spiritual message. I thought that was really very poignant, and I really enjoyed those performances. And then the dance was just spectacular. It was just a treat for the eyes, the ears, everything, and it was just a very moving performance."Â Like her husband, Christina felt that it was exactly this spiritual element that made the show so uniquely special for her. "The color, the music, the dance, I mean, just the whole multimedia kind of spectacle of it, was incredible. And I think the thing that made it unique for me was that sense ... about spirituality and goodness-and I think that rang through, and that's what made it very unique for me, in watching it."Â When Christina was asked which performance she liked best, she replied, "Oh, I think all of them ... each piece offered some spirituality and certainly goodness. And I think you cannot leave without feeling good. And that is, I guess what's uplifting: hope. That was the message, and I think that's what you come away with."Â Â

"Spirituality is Personal. Everyone Should Be Able to Follow their Beliefs"Â Â

In commenting on the piece about the persecution of Falun Gong, the mayor replied, "There was that sense of not having religious freedom, which of course in the United States, we have a very strong sense of religious freedom ... It's that idea that, spirituality is personal. Everyone should be able to pursue their beliefs, because that's what's genuine, that's what's real." Â

He continued, "People have to be able to follow their own spiritual sense, they have to be able to follow their sense of God, and their relationship with God, and be able to pursue that. And I'm hoping that the rest of the world will find that too ... it's wonderful if the whole world can embrace the idea that people should be free to pursue their beliefs, and the things they feel make them better, and help them make a better world."

“Theater Director: "It's Wonderful for Me to Experience It" (Photo)”