Theater Director: "It's Wonderful for Me to Experience It" (Photo)

Divine Performing Arts International Company staged its first show this year in Los Angeles on December 30, 2008. Sharon and Steve, manager and director of scheduling for events at the Music Center Performing Arts Center of Los Angeles County, in downtown Los Angeles, attended the show at the Pasadena Civic Auditorium.

Sharon told the reporter her impressions during the intermission, "It's lovely." She said that the dancing was very impressive, and was very graceful. "Also, it is kind of a nice mix and very beautiful to look at... the costumes and backdrops," she continued. "I liked the blossoms [referring to The Udumbara's Bloom]. One thing that I noticed was a connection to nature from the backdrops. I thought that was very moving to see that. The actual flower blooming, and how the dancers were able to represent it so well, in such a graceful way." 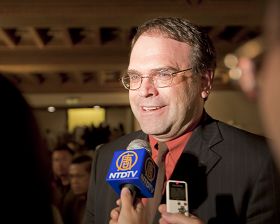 Steve, director of scheduling events at the Music Center in downtown Los Angeles

Steve said in an interview about his impression of the show, "I really think the costumes are beautiful, too. It's just a wonderful presentation. I really liked the number where people in modern dresses came down from the heaven [referring to "Persecuted on a Sacred Path"], That was really moving."

He commented about the show from his professional perspective, "I am really quite impressed by the number of performers and the costume changes and how much activity is happening on stage and how it flows so smoothly. It's really quite a feat. I think they are really doing a wonderful job."

Steve said he learned a lot from the show, "It's definitely a different culture that I am used to, that I was brought up with, so it's fascinating for me to see it. I don't know a lot about the Chinese culture, so it is wonderful for me to just experience it," he added. "It is very spiritual. I was very impressed by the feeling about the dancers and the singers and the message that I was able to understand from that without really understanding the language."

He said, "This isn't something that comes to Los Angles, or at least what I am accustomed to. So, it's is very nice to be able to come to Pasadena and see this."