Police Covertly Cremated the Remains of Mr. Qian Shiguang, Who Had Been Severely Injured (Photo)

(Clearwisdom.net) Mr. Qian Shiguang, 65, was a senior engineer at the China Petroleum Exploration Institute Northwestern Branch. He died as a result of torture on September 8, 2008, in the Gongjiawan Brainwashing Center. 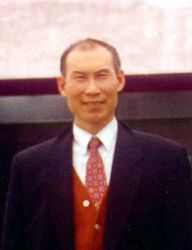 According to witnesses, Mr. Qian appeared to have been severely traumatized. His face was bruised, his eyes bulged, and both of his hands were dark. Afraid of having their brutality exposed, the police dared not use a crematorium, and cremated the body secretly.

Before his death Mr. Qian wrote about some of the abuse and brutal mistreatment he experienced on small slips of paper, under extremely difficult circumstances. What he wrote exposed some of the facts about how Dafa practitioners were abused in the brainwashing center.

Mr. Qian's former employer was also involved in persecuting him. Mr. Qian's illegal forced labor camp term expired in April 2008. One of the Party secretaries at his workplace said, "Keep on detaining him [Mr. Qian] and do not release him. We would be willing to pay the brainwashing center 3,000 yuan to do this."