(Clearwisdom.net) On January 10th, 2009, Divine Performing Arts (DPA) New York Company presented its third and fourth shows at the John Bassett Theatre in Toronto. The theater was completely packed for both shows. The show presented the audience with a performance of purity, freshness, compassion and beauty. Local Chinese people had high praise for the show and found the DPA performances to be a great source of pride. 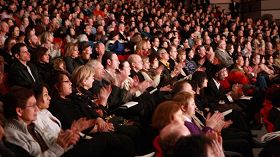 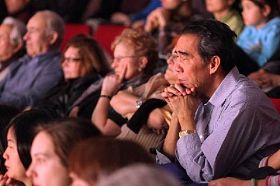 Chinese immigrant: "I found my pride as a Chinese by watching the DPA show"

Mr. Liu came to Canada three and a half years ago. He saw the DPA show for the third time on January 10. After watching the show, he said, "Watching a show like this in a western country, I feel that I found my pride in being a Chinese. I am so proud of it." 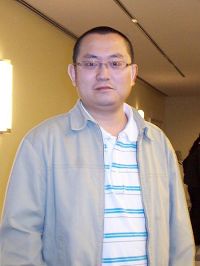 Mr. Liu from China feels great pride in being Chinese as a result of the DPA performance

Mr. Liu enjoyed the dancing very much, one of his favorites being the dance drama "The Monkey King Triumphs." Mr. Liu felt that the DPA shows conveyed the concept of compassion. He also said that it was very good that the show revealed the fact that Falun Gong practitioners are being persecuted in China. He felt that the show's format was a very good way to tell the outside world what was happening in China.

New immigrants enchanted by the pure beauty of the show

Mrs. Cao had just come to Canada from China. She watched the show with her two daughters. Ms. Cao said, "It was so exciting to watch the DPA show overseas!"

She continued, "I like the show very much, I enjoyed every number. It is fantastic. The costumes, the backdrops, and the music are all beautiful. Many of the stories are very good for educating the younger generation."

Mrs. Cao's daughters were very impressed with the costumes. One of her daughters said, "The costumes are indeed beautiful. I like the costumes the most, and the designs are so beautiful." They both agreed that they liked every performance, but what impressed them the most was "Mulan Joins the Battle."

They said they would recommend the show to their friends, and hoped to see more DPA shows in the future.

"The dancing presented the real essence of minorities in China"

Mr. Wang, from Shandong Province, came to Canada two years ago. Mr. Wang has a background in the arts, and told a reporter during intermission that the performances were so great that they were far beyond his expectation.

"It is brilliant, so great. I did not know that classical Chinese dance could be so expressive," Mr. Wang said with excitement.

Mr. Wang said that he especially enjoyed the two minority dances, because they presented the true essence of Chinese minorities. The dances representing ethnic minorities in China included "Dance of the Yi" of the Yi ethnic group, and "Dance of the Snow-Capped Mountain" of the Tibetan ethnic group. Mr. Wang appreciated how the Tibetan dance shows their unmatched joyful hearts and respect for gods and Buddha.

"I have never experienced the inner content and the expressive capability of classical Chinese dance before," Mr. Wang said. "I did not expect that the program would be so wonderful." Mr Wang also mentioned that several Chinese people seated around him had similar feelings - that this show was so wonderful, far beyond their expectations.

A woman who came to Canada three years ago from Tianjin had seen the DPA show during the Mid-Autumn Festival. She made a point to see the show again in Toronto. She said that it was unbelievable that after watching the first half of the show, she, who once was a die-hard atheist, now believed that divine beings exist. This woman, in her forties, emphasized again and again during the interview that she was once a firm atheist. When she saw the Falun Gong dance-drama "Heaven Awaits Us Despite Persecution," right at the moment that the backdrop showed the Falun Gong practitioner walking in the heavens and becoming a Buddha, she suddenly felt that it was such a natural process, that the atheism concept melted right away.

"Before this, if somebody mentioned the existence of gods to me, I wouldn't believe it at all and wouldn't be able to listen any more," she said. "But this artistic presentation lets one feel unconsciously that all of this is real. It is so real, so natural."

She said that after seeing a human being rise and become a Buddha, she did not think about it from the standpoint of atheism, and she felt so surprised.