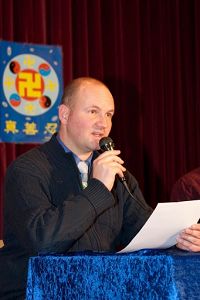 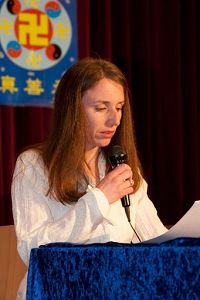 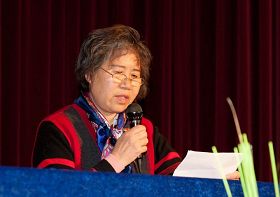 Many new and veteran Falun Gong practitioners share their cultivation experience in the conference.

Western Falun Gong practitioner Andreas from the Quitting the Chinese Communist Party (CCP) Service Center located in front of the Cologne Cathedral talked about raising awareness of the persecution against Falun Gong among Chinese tourists at the site since 2002. The Cologne Cathedral is a world-renowned tourist site. When the tide of quitting the CCP began two years ago, practitioners also set up the Quitting the CCP Service Center there. Over two thousand Chinese tourists who came to visit this beautiful city beside the River Seine announced their withdrawals from the CCP and its affiliated organizations at the center.

Practitioners noticed changes in Chinese people's attitude in recent years. When they first started to give out leaflets in 2002, many Chinese people would say abusive words. A few of them were very hostile. Nowadays the majority of Chinese people are quite pleased to receive the materials. Some of them would watch the Falun Gong exercise demonstration with great curiosity. However there are still a few Chinese people who are unfriendly. Practitioners talk to them about the human rights atrocities committed by the Chinese Communist Party so that they would have an opportunity to position themselves.

A Chinese practitioner talked about the motivation behind his involvement in raising awareness amongst Chinese people: "Many Chinese people in Mainland China don't know what is happening in their own country. Seeing Falun Gong here is probably their only opportunity in life to withdraw from the evil CCP organizations."

Ms. Yang is an elderly woman. Her German is not very good. So she has been telling Chinese people the truth and persuading them to withdraw from the CCP organizations through making phone calls to China for several years. One time during a phone call to China, the person receiving the call claimed that he is a policeman and then hung up the phone. Ms. Yang didn't give up. She called him again and told him: "Whether you are a riot police officer or a public security police officer, my purpose is to save people and it is for your own good." Finally this policeman agreed to announce his withdrawal from the CCP on the Internet with Ms. Yang's help.

The German edition of TheEpoch Times started in 2004. One year later, it launched a printed version. In order to help this newspaper reach a healthy financial situation, advertisement salesperson Nina talked about how she overcame her worries about having an unstable income as a salesperson, her prejudice about salespersons and her fear of being rejected by potential customers for advertisements. From a group having little knowledge about sales, the advertising sales group for the German Epoch Times now has thorough knowledge and understanding about advertising. Some long time customers introduced new customers to the paper. Although these new customers may not know the newspaper well, they trust the paper. As a result, long-term business relations have been established.

Peter, who started to practice Falun Gong four years ago, realized the importance of studying the Fa and maintaining righteous thoughts constantly during ticket sales for the Divine Performing Arts show. The ticket promotion group always read Zhuan Falun first and then shared their experiences. After sending forth righteous thoughts at 11:00 a.m., they then went out to sell tickets. They truly put the Fa first. During a sales promotion to a company with a Chinese practitioner, they were not let in so they had to leave promotional materials on the doorstep. The Chinese practitioners said that she had never encountered such situation. From this incident, Peter realized his "westerner's notion" that it is quite normal to be received on a doorstep and leave the materials there. After eradicating this notion of ordinary people, almost every company let them go in. Even senior managers from some companies expressed their interests in the show.

Ms. Zheng also shared her experience of distributing the DPA show special edition. She mainly gave out the paper at the Metro entrance in the daytime and theatre entrances in the evenings. During the process, she met with all kinds of people. Some would accept the paper with a friendly smile. Some would show little feeling while others would wave their hands with displeasure. She felt that it was just like the situation of wandering around in the society mentioned in Zhuan Falun by Master Li. One day she was so busy and didn't even have time to have a meal. An elderly female practitioner asked her if she could go with her and give out the DPA show special edition at the theatre entrance at 11:00 p.m. At that time it started to rain, and Ms. Zheng felt cold and hungry. But she couldn't bear to let this practitioner go alone with such heavy materials, so she went with her. The rain became heavier and heavier. When she took shelter from the rain in a restaurant and started to eat the dry bread she brought with her, she felt a bit of self-pity and stared to cry. At that moment that elderly practitioner said: "You wait here, I forgot to put up some promotion materials when we passed a coffee shop." She quickly walked into the rain without slight hesitation. Ms Zheng felt ashamed by her self-pity just then. The elderly practitioner returned soon and brought with her two cups of coffee. She quickly finished her coffee and said: "I'll read Zhuan Falun." Ms. Zheng was moved to tears. While she was ashamed by her own fear of enduring hardship, she was much more moved by her fellow practitioner's diligence.

During the distribution of the special edition, Ms. Zheng also learned that she must let go of her attachments of fear of losing face. Even when facing unfriendly and discouraging comments, one must not give up. If one time does not go well, try second time, third time, etc.

The subject of Ms. Zhou's sharing was how to maintain righteous thoughts when dealing with the media. A few months before the Beijing Olympics, she and a Sports Reporter's Association jointly organized a seminar introducing the current situation in China. In the seminar, she, as the chief editor of the Chinese edition of the European Epoch Times newspaper, spoke on the Chinese Communist regime's media blockade. An editor for the German edition of The Epoch Times presented a report titled "Falun Gong - from a sport for the general public to the No. 1 enemy of the Chinese Communist regime". Over seventy reporters from the German media, including German's largest newspaper, magazine and TV station, attended the seminar and obtained the anti-internet blockade software developed by Falun Gong practitioners. Even on the day the Olympics opened, there were still German reporters sitting in Beijing's International media centre sending emails to Germany, asking for the latest version of the anti-internet blockade software.

During the seminar, a reporter who had a misunderstanding about Falun Gong launched an attack. Ms. Zhou's attachment to competitiveness started to come out. After a few minutes' inner struggle, she felt her attachment to competitiveness melt away. When the seminar over, she went to talk to this reporter. As a result, this reporter had a better understanding about Falun Gong practitioners.

Stefan is a new practitioner. He started to practice Falun Gong in September 2007. He shared his experience of organizing a nine-day lecture class. During the search for a venue, he concentrated on finding a large seminar hall, but failed to find anything even two days before the class was due to start. He asked for help from another practitioner. She found a hotel for the class venue the next day. Stefan concluded: "When I must complete a task, in general I prefer to do it alone. Then I don't need to discuss with anyone and just do it according to my own will. But I couldn't find a suitable venue. Why could she find one, while I couldn't? Why did her idea happen rather than mine? I realized that I must learn to trust others. I shouldn't try to plan out everything on my own. Other people could also have good ideas and suggestions."

After the experience sharing conference ended, new practitioner Ms. Sun said sincerely, "I must practice Falun Gong well! Every sharing was extremely touching." She said that the sharing about clarifying the truth in front of the Cologne Cathedral and about telling Chinese people the truth through telephone calls made profound impressions on her. Now she is thinking how to clarify the truth to people around her and encourage them to quit the CCP.