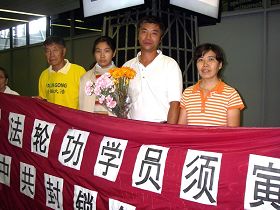 “Intensified Persecution in Hengshui City, Hebei Province Prior to the Beijing Olympics”