On August 31, 2008, the Tianti Bookstore opened up a new branch in Toronto's Chinatown. Zhang Zhaojin from the Toronto Falun Dafa Association and Hong Shizhong, chairperson of the Greater Toronto Chinese Community Association, attended the opening ceremony. 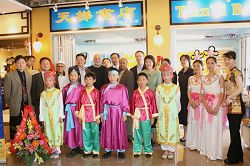 Celebrating the grand opening of Tianti Books in Toronto 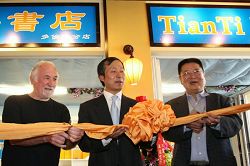 Tianti Books Inc. was founded in April 2007 and registered in the US under section 501(c)(3) of the Internal Revenue Code as a non-profit organization. The bookstore is dedicated to providing the public with original books, as well as audio and video information about Falun Dafa (also known as Falun Gong). The bookstore also sells publications put out by the Minghui and Clearwisdom websites, and classical Chinese literature to help people understand the tradition of cultivation culture.

"I know that the principles of Falun Gong are very peaceful and full of love and kindness, which are what we need," said Clement Rodrigo, leader of the Asia and Sri Lanka Community in Toronto, "I hope everyone will visit the newly opened Tianti Books and come to understand these principles. I see many Falun Gong practitioners recover from their illnesses through the practice."

"I think the opening of Tianti Books in Toronto means a great deal for the dissemination of traditional Chinese culture. Stop by the bookstore and take a look. Falun Gong is nothing like the Chinese Communist Party's (CCP) propaganda portrays it to be," said Hong.

"In Canada, we can say and do what we want, but on the other side of the world, practicing Falun Gong risks persecution," said Gerry O'Pray, former chair of the United Nations Association in Canada - Toronto Region.

Michael Mahonen is an actor and the director of the movie Sandstorm. He has been practicing Falun Gong for almost eight years. Mahonen said, "I think it's a wonderful thing that people can buy Falun Dafa books easily, especially in Chinatown. It allows the Chinese people to read the Falun Gong publications instead of just listening to the CCP slander and lies. People can buy a book and judge for themselves.

"The first thing the CCP did when it started suppressing Falun Gong was confiscate all the Falun Gong books and destroy them. And then it started to make up lies. People didn't have a chance to understand Falun Gong themselves. Now that Tianti Books is open, people can come in and see for themselves. It's a great opportunity not only for those who are interested in the practice but also for those who want to understand the truth about the persecution of Falun Gong."

Mao Fengying, a Falun Gong practitioner, attended the opening ceremony. Mao said that she used to suffer from cirrhosis of the liver and kidney failure. She had seen many doctors and taken lots of drugs. "They couldn't do anything about my conditions and concluded that I had less than one year to live," said Mao, "I then started practicing Falun Gong and reading the book Zhuan Falun. I followed Truthfulness-Compassion-Forbearance in order to become a good person. In less than a month, my illnesses were completely gone.

"It's been 12 years since I started practicing Falun Gong. I immigrated to Canada and had a son. I thank Falun Dafa for giving me a second life."

“Western Practitioner: An Understanding of "Kindly Pointing Out"”